Below you will find a complete list of shows offered at the Planetarium. These are offered throughout the year during our public shows or can be chosen for private events and field trips.

These shows are presented live by Planetarium staff and allow for audience interaction. Each show runs about 30 minutes.

Tours of the universe using our digital systems:

These shows are presented live by the Planetarium staff and allow for audience interaction. Each show runs about 30 minutes.

These films take audiences on journeys to the near and far through educational, interesting and sometimes comical narratives.

AMAZING STARGAZING: This show walks us through the wonders of the seasons' night skies and the tips and tricks to finding the best constellations! Also included are easy to understand explanations of comets, asteroids, and meteor showers.

COSMIC COLORS: Cosmic Colors will take you on a wondrous journey across the entire electromagnetic spectrum. Discover the many reasons for color—like why the sky is blue and why Mars is red. Take a tour within a plant leaf and journey inside the human eye. Investigate x-rays by voyaging to a monstrous black hole and then back at your doctor’s office. You will even see the actual color of a dinosaur--based on recent evidence. Get ready for an amazing adventure under a rainbow of cosmic light! 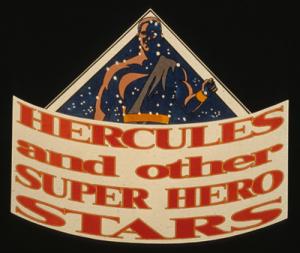 HERCULES AND OTHER SUPERHERO STARS: What better way to learn about the rainbow of stars than from the stars in the sky? Watch Hercules and other constellations come alive to show how stars work, the difference between red and blue stars, and all the spectacular stellar features up above. Recently remastered to 360 full-dome by MWA Planetarium, this Minneapolis Planetarium program is a true gem.

LARRY CAT IN SPACE: A cartoon of a curious cat, Larry, who takes a trip to the moon. Great for young children! 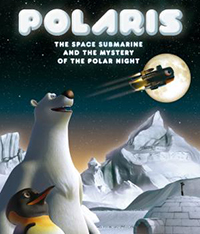 POLARIS, THE SPACE SUBMARINE AND THE MYSTERY OF THE POLAR NIGHT: James, a traveling penguin from the South Pole, and Vladimir, a funny bear from the North Pole, meet on the Arctic sea ice. They become friends, talk about their respective regions and observe the stars together, wondering why the night is so long at the poles of the Earth. Novice astronomers, they are trying to solve this mystery by reasoning and observation.

SUN STRUCK: Discover the wonders of our Sun. Its incredible energy has supported life on earth for millennia, but is now threatening our technology and way of life. Travel to the distant future to discover our Sun's connection to the Universe's cosmic cycle of life and death.

TWO SMALL PIECES OF GLASS: "Two Small Pieces of Glass - The Amazing Telescope" show follows two students as they interact with a female astronomer at a local star party. Along the way, the students learn the history of the telescope from Galileo’s modifications to a child’s spyglass — using two small pieces of glass — to the launch of the NASA/ESA Hubble Space Telescope and the future of astronomy. Aiming to engage and appeal to audiences of all ages, the show explores the wonder and discovery made by astronomers throughout the last 400 years.

BLACK HOLES: No longer the stuff of science fiction, the discovery of the black hole is a triumph of modern science. Explore the fascinating world of black holes in this program narrated by Academy Award nominated actor Liam Neeson.

DYNAMIC EARTH: Explore the inner workings of Earth's climate system. With visualizations based on satellite monitoring data and advanced supercomputer simulations, this cutting-edge production follows a trail of energy that flows from the Sun into the interlocking systems that shape our climate: the atmosphere, oceans, and the biosphere. Audiences will ride along on swirling ocean and wind currents, dive into the heart of a monster hurricane, come face-to-face with sharks and gigantic whales, and fly into roiling volcanoes. Narrated by Liam Neeson.

EUROPE TO THE STARS: Europe to the Stars takes the viewer on an epic journey behind the scenes at the most productive ground-based observatory in the world, revealing the science, the history, the technology and the people. Discover the European Southern Observatory in a story of cosmic curiosity, courage and perseverance; a story of observing a Universe of deep mysteries and hidden secrets; and a story of designing, building and operating the most powerful ground-based telescopes on the planet. The movie focuses on the essential aspects of an astronomical observatory, while offering a broader view of how astronomy is done. From site-testing to locate the best places in the world for observing the sky, to how telescopes are built and what mysteries of the Universe astronomers are revealing. 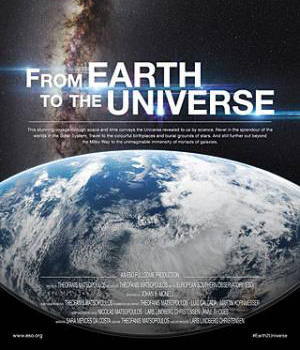 FROM EARTH TO THE UNIVERSE: The night sky, both beautiful and mysterious, has been the subject of campfire stories, ancient myths and awe for as long as there have been people. A desire to comprehend the Universe may well be humanity's oldest shared intellectual experience. Yet only recently have we truly begun to grasp our place in the vast cosmos. To learn about this journey of celestial discovery, from the theories of the ancient Greek astronomers to today's grandest telescopes, we invite you to experience From Earth to the Universe. 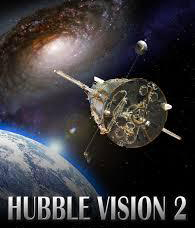 HUBBLE VISION 2: "HUBBLE Vision 2" is a Full-Dome video about the important discoveries of the Hubble Space Telescope. Discover for yourself where stars are born and how they die; what the first galaxies in the universe looked like; and what happens when a comet crashes into Jupiter! All this, and more, presented using some of Hubble's most amazing images. It's "a fascinating tour of the cosmos - from Earth orbit!".

LIGHT YEARS FROM ANDROMEDA: A beam of light leaves the Andromeda Galaxy and arrives at Earth over 2 million years later. Follow the light beam as it travels through intergalactic space and discover how vast the space is between galaxies. Learn about the history of humanity and the how astronomy developed in the amount of time it took the light beam to reach us. "Light Years From Andromeda is a story of cosmic distances, and humanity's quest to understand the universe. Take a journey of epic proportions across space and time!" Narrated by Michael Dorn. 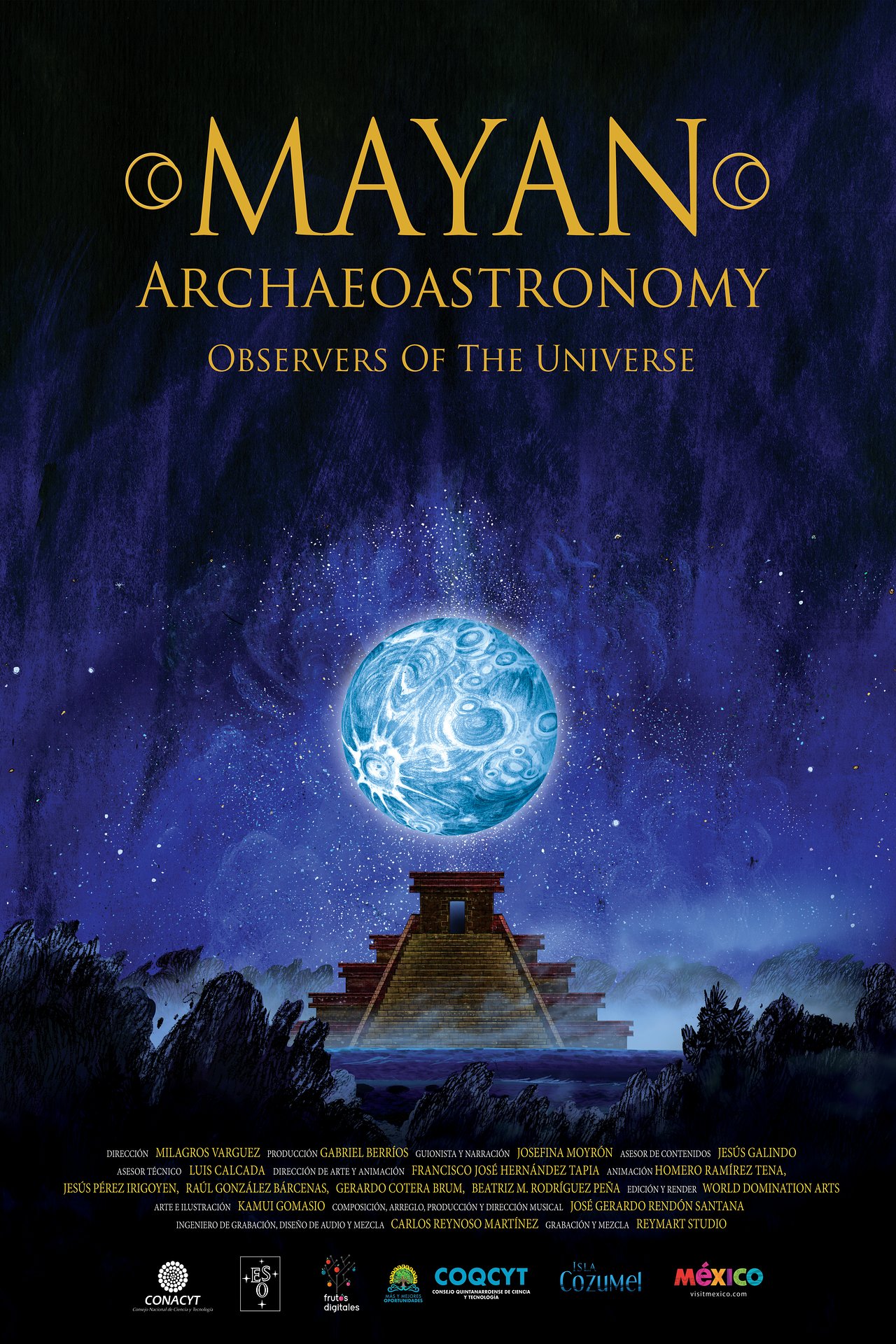 MAYAN ARCHEOASTRONOMY: In a feast of colours and sounds, Mayan Archaeoastronomy: Observers of the Universe makes a tour of 6 Mayan temples: San Gervasio, Chichen Itzá, Uxmal, Edzná, Palenque and Bonampak where the spectator dives into a Mayan world of knowledge about the importance of the orientations of its temples in relation to the movement of some stars like the Sun, the Moon and Venus. 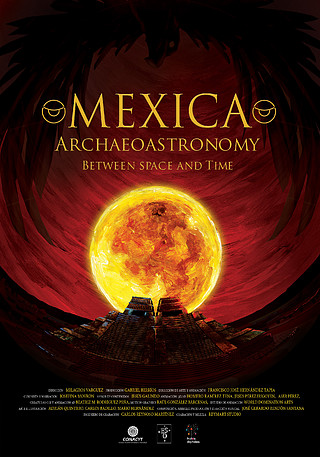 MEXICA ARCHEOASTRONOMY: Through impressive immersive scenarios, "Mexica Archaeoastronomy: between space and time" illustrates the important role played by astronomical observation for the evolution of pre-Hispanic cultures in central Mexico. The Mexicans used the calendrical and astronomical knowledge inherited by their predecessor cultures to found the capital of their empire: Tenochtitlan. Vibrant colours, shapes and sounds transport the viewer to one of the most important cultures that, to this day, still lives in the heart and skin of the Mexican people.

PHANTOM OF THE UNIVERSE: From the journey of protons racing through the world’s largest particle collider in Europe to up-close views of the Big Bang and emergent cosmos, Phantom of the Universe is a new fulldome planetarium show designed to immerse audiences in the search for dark matter. A collaboration of Lawrence Berkeley National Lab, University of Texas at Arlington, Michigan State University, IFIC at University of Valencia, as well as other institutions. It is narrated by Oscar-winning actress, Tilda Swinton. 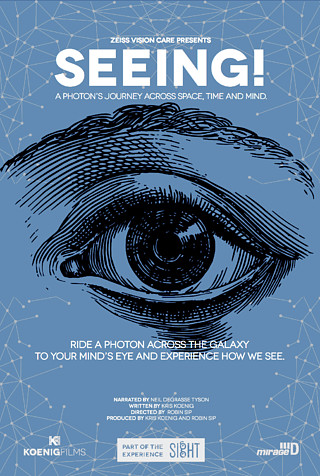 SEEING! A PHOTON'S JOURNEY ACROSS SPACE, TIME, AND MIND: Follow the journey of a single photon as it is produced in a distant star, before travelling across the vast expanse of space to land on someone's retina. This fulldome planetarium show explores some of the fascinating processes of the cosmos, from astrophysics to the biology of the eye and brain. Funded through a generous grant from ZEISS, the show is narrated by astronomer and science communicator, Neil deGrasse Tyson.

THE HOT AND ENERGETIC UNIVERSE: The planetarium documentary “The Hot and Energetic Universe” presents, with the use of Immersive visualisations and real images, the achievements of modern astronomy, the most advanced terrestrial and orbital observatories, the basic principles electromagnetic radiation and the natural phenomena related to the High Energy Astrophysics.

THE SUN, OUR LIVING STAR: The Sun has shone on our world for four and a half billion years. The light that warms our skin today has been felt by every person who has ever lived. It is our nearest star and our planet’s powerhouse, the source of the energy that drives our winds, our weather and all life. The passage of the Sun’s fiery disc across the sky — day by day, month by month — was the only way to keep track of time for countless past civilisations. Don’t be fooled by the terminology; although it is a typical dwarf star, the Sun consumes 600 million tons of hydrogen each second and is 500 times as massive as all the planets combined. Discover the secrets of our star in this planetarium show and experience never-before-seen images of the Sun’s violent surface in immersive fulldome format. 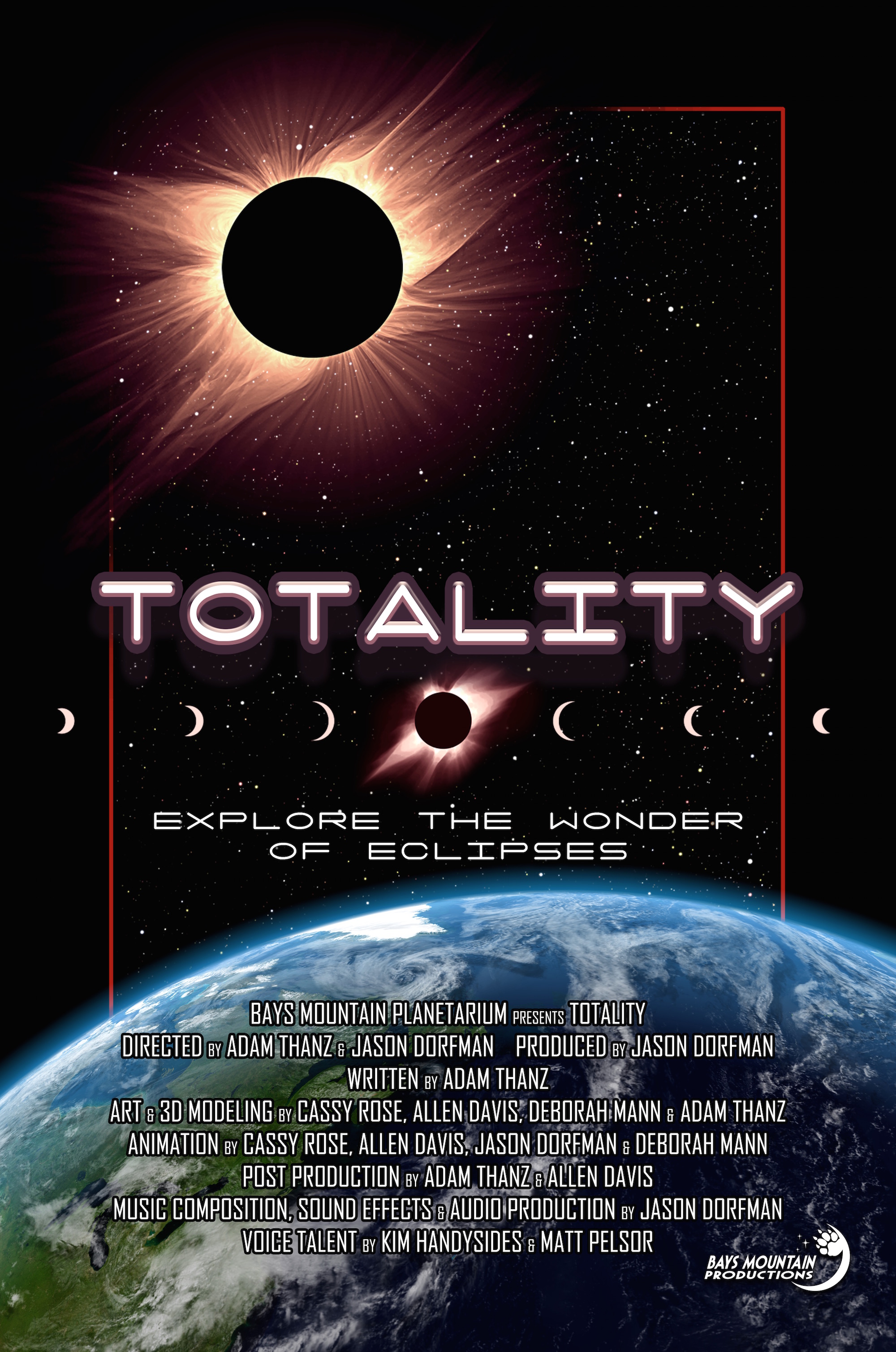 TOTALITY: This program is all about eclipses, from lunar to total solar. We cover how they occur and what happens when they do. We look back to the proof of general relativity and look forward to upcoming eclipses and where to witness them. A very special part of the show relates, in a very human way, what happens when you are caught in the shadow of the Moon and the Sun is plunged into a total solar eclipse.

These shows are no longer in our public show rotation but are still available for private events or field trips.

WILBEAR'S ADVENTURE: All about a Teddy Bear who wants to fly! From the constellations to the story of the Wright Brothers Wilbear learns about the sky and our endeavours to join the birds who fly in it. Length: 22 mins     Audience: Ages 3-8

MARS QUEST: People have always been fascinated by the planet Mars. Learn about the history of the fascination with Mars from classical times to present day. Many spacecraft have now landed on Mars and we have discovered many important things about Mars through these explorations. Finally, consider what Mars might be like in the Future. Will we ever be able to live there? Length: 40 mins     Audience: General Public

VOYAGER ENCOUNTERS: From 1979 to 1989 the Voyager 1 and 2 missions explored the amazing reaches of our outer solar system. The cameras on these two spacecraft were the first to see many of these solar system objects up close. Join us as we celebrate planet month by investigating the journeys of these two landmark spacecraft. Narrated by Patrick Stewart. Length: 43 mins     Audience: General Public