The herbarium is a continually expanding collection of more than 48,000 dried botanical specimens housed in standard herbarium cabinets.

Almost all of the specimens were collected from populations of native or naturalized vascular plants. In addition, there are small collections of algae, mosses, lichens, and fleshy fungi.

It was founded by and is named for Dr. Olga Lakela (1890-1980), a native of Finland who emigrated to northeastern Minnesota as a child. She earned a Ph.D. in botany from the University of Minnesota and was the first Biology Department Head on the Duluth campus. 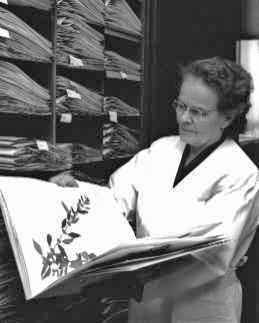 Approximately half of our specimens were collected by Dr. Lakela, and her extensive work in St. Louis and Lake counties of Minnesota is summarized in her book, A Flora of Northeastern Minnesota (1965, University of Minnesota Press). Olga Lakela founded this herbarium in 1935, and the University named it after her in 1960. A bequest from Dr. Lakela supports the maintenance and growth of the collection, as well as botanical research at UMD.

The collection is notable for its holdings of Canadian and northern U. S. plant species near the southern margin of their geographic range. The oldest specimen in the collection dates from 1846 (Florida), but most are from the 1940s through the present.

Plant scientists visit the herbarium for the purpose of examining specimens that are important in their research, or they may arrange for a loan of specimens to be sent to their home institution. Duplicates of specimens collected by UMD botanists are sometimes provided to other herbaria, usually in exchange for specimens we receive from them. The Olga Lakela Herbarium is listed in Index Herbariorum, with its international code being DUL.

Since 1990, Lakela Herbarium personnel provided the first documentation for the occurrence of many species outside of cultivation in their respective states. The list of these first occurring species can be found here. Additional information can be found at the University of Minnesota Herbarium and the Wisconsin State Herbarium.

Here is a listing of the nomenclatural type specimens held by the Lakela Herbarium.

Other services provided by the Lakela Herbarium include: