Photographed above: The exterior of the Swenson Science Building

Jim and Sue Swenson, through the Swenson Family Foundation, have demonstrated in countless ways the impact of private philanthropy on students at UMD and in the Swenson College of Science and Engineering.

For more than 20 years they have supported scholars studying Chemistry and Biochemistry through full tuition scholarships and summer undergraduate research awards. Jim and Sue were instrumental in the building of the James I. Swenson Science Building (opened in 2005) and the Swenson Civil Engineering Building (opened in 2010). In 2007, the name of the College was changed to the Swenson College of Science and Engineering in recognition of their tremendous philanthropic support. 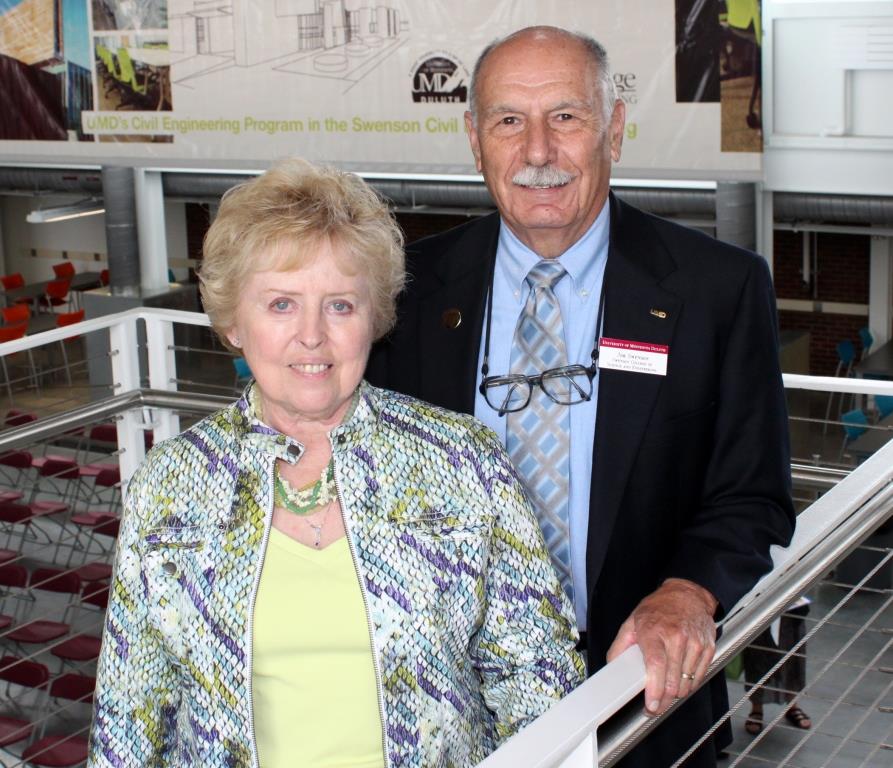 James I. Swenson, a 1959 alumnus and the foundation’s president, attributed much of his outstanding success to the education he received on campus. Because of the help extended to him in his early years as a college student at UMD, he and his wife, Susan, have generously given back. Jim personally experienced the challenges of paying for college. A personal loan from a local banker allowed Jim to continue his education and laid the foundation for his future philanthropy.

Born in Superior, Wisconsin, Jim was an energetic and creative man with deep roots in the Northland. The eldest of five brothers, Jim worked hard to help support his family after his mother’s death in 1955, working alongside his father at Eddy’s Bakery and cleaning carpets for his future father-in- law. He began college at the University of Wisconsin Superior and transferred to UMD to enroll in the chemistry department, where he termed his learning experiences “outstanding.” Working in the UMD chemistry lab doing peat research, Jim said he received much individual attention, outstanding career counseling, and “a real feel for industry and research” – things he and Sue pass on to future generations of UMD students through their contributions.

After graduation Jim worked for several large corporations including Honeywell and Univac before realizing he “did not feel comfortable in the large corporate structure.” With four employees and a $15,000 second mortgage on his house, he began his own company – a small printed circuit shop – with the goal “to bring high technology printed circuits out of research and into industry.” His company, Details, Inc., became the fastest quick-turn-around engineering prototype circuit board shop in the United States, with a company client list that included Compaq, IBM, Apple, and Motorola, before being sold in 1997. “I’ve been blessed with more than I ever thought possible,” Jim has said. “It’s time to give some of that back.”

Because of Jim and Sue Swenson’s strong commitments to students and to education, the Swenson College of Science and Engineering continues to build on its tradition of excellence. In transforming the college, they have transformed lives.