Plans are in the works to restore an observatory on the roof of Marshall W. Alworth Hall on the UMD campus.

A Window to the Universe

Plans are underway to restore an observatory space on the UMD campus. The new facility will include a high powered telescope housed under a retractable dome and adjacent control room to maneuver the telescope and analyze the images and data collected.

This new construction marks the return of an observatory on the UMD campus.

In the University's 1971 building request, a classroom and laboratory building (now Marshall W. Alworth Hall) was proposed, with the provision that it be able to house an astronomical observatory on it's roof. The building was completed in 1974 and a telescope installed soon after. 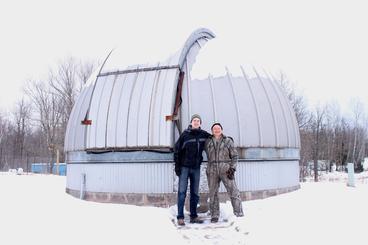 Years later, the observatory was removed as campus spaces continued to evolve to best meet the needs of our students, staff and faculty. Fortunately, the dome was not discarded. It was given to a supporter of UMD's Physics & Astronomy Department Glenn Langhorst, who has maintained and used the dome on his private property. Langhorst has recently returned the dome to UMD to give it a new life.

The dome will be reinstalled on the roof of the Marshall W. Alworth building. Architectural drawings include plans for a rooftop patio space for night sky viewing.

In order to move the dome, it was recently taken apart and moved from Langhorst's home in Willow River, Minnesota into storage at the UMD campus. Returning the dome to UMD is the first step toward making a new observatory a reality. Private funding is needed to move forward and opportunities to put your name on the project are available.

To discuss a contribution to the UMD Observatory please contact Carrie Sutherland, Senior Development Officer, at 218-726-6984 or [email protected].