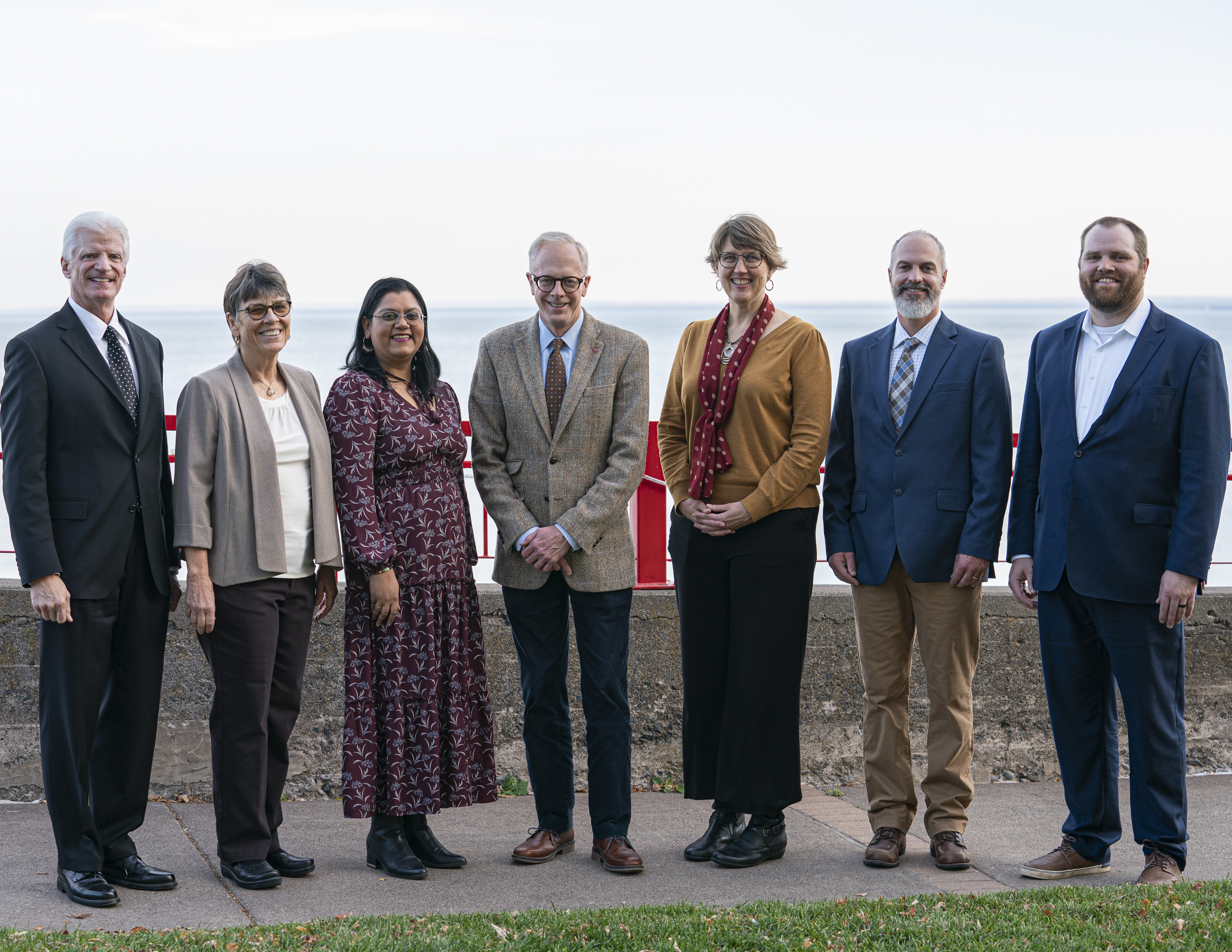 This is the first year the College recognizes Inspiring Scientists and Engineers as part of the Academy of Science and Engineering. Dean Wendy Reed established this award to recognize alumni who are early in their careers and making significant contributions in STEM fields.

On Friday, October 21, 2022, two new members were inducted into the Academy. Our first Inspiring Scientist and Inspiring Engineer recipients were also recognized at the dinner and award ceremony.

Tom Ferguson completed pre-engineering at UMD prior to graduating in 1979 from the University of Minnesota-Twin Cities with Bachelor’s and Master of Science degrees in Electrical Engineering, with concentrations in power, nuclear reactor design, and electromagnetics. His engineering career started at Minnesota Power (MP) in 1979, and he retired in 2007 as Vice President of Power   Delivery and Transmission, where he was responsible for high-voltage transmission planning, engineering, operations, construction, maintenance, and regulatory compliance. His career included extensive leadership roles in regional, national and International power systems organizations, and he served as an advisor on grid issues to several U.S. senators. Tom was also deeply involved in the startup of engineering at UMD, and chaired the electrical engineering Industrial Advisory Board for 17 years.

Following retirement from Minnesota Power, Tom served as an industry consultant and expert witness on multi-state grid reliability issues and renewable energy projects. Tom joined UMD’s electrical engineering department in 2007 as a 3M McKnight Visiting Professor, with the objective of significantly expanding coursework in power and energy within the Swenson College of Science and Engineering (SCSE). In addition to developing and teaching those new energy courses, Tom also created a proposal for the establishment of a campus-wide multidisciplinary center for energy, one result of which was the creation of an SCSE energy minor.  Tom also initiated several courses in antenna theory and design, and outfitted a well-equipped antennas laboratory. Tom taught his last course at UMD in 2021. He and his wife Dorothy, an alumnus of UMD, endowed an engineering scholarship at UMD in 2015.

While in medical school Heidi volunteered at Curran Hospital in Zorzor Liberia, the experience helped her to find her path as a physician. Heidi completed her residency at Eau Claire Family Practice in 1983. For two out of the three years, Heidi was the only woman in the program, and one of only three women doctors in the entire medical community. From 1983-2018, Heidi worked in Bigfork, Minnesota with two other Family Physicians . They cared for people through the community and in the 24-7 emergency room, hospital , clinic, and nursing home. She served as Director of Emergency and Ambulance Services from 1983-2018. In 2002 she was named  Minnesota Ambulance Association Medical Director of the Year.

Volunteering and community service is a lifelong commitment for Dr. Korstad. She has volunteered overseas in Liberia, Africa,  Guyana, South America, and Tanzania, Africa. She also served as a medical educator in the preceptor program for Duluth family practice, the UMD and U of M medical school. as well as a PA and RPAP preceptor.  Heid is a current member of the Blandin Foundation and served as a board member for the Edge Center for the Arts and raised $2 million dollars for the performing arts center in Bigfork, where she still serves as the technical director of the theater.

Dr. Nathan De Jager applies geospatial tools to solve problems in natural resources management. He graduated from UMD in 2005 with an M.S. in Biology and went on to get a PhD in Ecology,  Evolution and Behavior from the University of Minnesota Twin Cities. Nathan currently works as a research ecologist for the Upper Midwest Environmental Sciences Center in La Crosse, WI. His team combines field research and spatial simulation models to better understand and forecast effects of environmental changes and management actions on a broad scale.

Originally from Ellsworth, Wisconsin, Ben Helmer came to UMD in 2008. In 2015, he graduated from UMD with BS and MS degrees in Civil Engineering and two national football championships, having played UMD football from 2008 to 2012. He is now a licensed      structural engineer focused on mid-rise multi-family and senior living facilities. He’s had the opportunity to work on a variety of projects and material types all over the United States. While at UMD, his research was focused on low temperature cracking performance of asphalt pavements.

Bhairavi Shankar is a Planetary Scientist, a Canadian Space Ambassador, and entrepreneur. In 2013 she received a PhD in Geology (Planetary Science. In 2018, she founded Indus Space, a social enterprise, to raise public awareness around Space Science and Exploration and its links to STEM. Through programs and workshops she works with all age groups. She loves to promote space science, Canada’s role, and multicultural professionals in the space sector. She serves on the boards at Lotus STEMM, engaging South Asian girls in STEMM, and the Royal Astronomical Society of Canada - Toronto Centre.