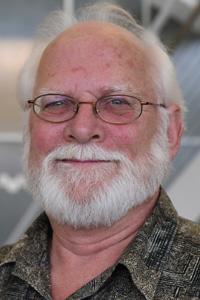 Dr. Hicks is an environmental microbiologist who studies the diversity and productivity of aquatic microbial communities, their role in the degradation and transformation of organic compounds, and the survival and virulence of pathogenic microbes in these communities. This work has taken him to the bottom of different great lakes using a manned submersible, to Russia, Africa, and various oceans, but current research efforts in his lab are focused on the North American Great Lakes and watersheds in northern Minnesota. He is the author or coauthor of over 35 scientific journal articles and book chapters. Much of the research conducted in his laboratory has been supported by the Sea Grant College Program, the National Science Foundation, and the U.S. EPA.

Several graduate students and I are investigating the introduction of exotic microorganisms into native microbial communities via ballast water discharge, the role of bacteria in the accelerated corrosion of steel structures in harbors, and the diversity, physiology and ecology of bacterial and archaeal microbes in great lakes.

The Great Lakes support indigenous microbes, as well as macroflora and fauna, which are critical to the maintenance of the physical, chemical and biological features of the Great Lakes ecosystem. Yet, virtually nothing is being done to protect the Great Lakes from the potential effects of introducing and translocating non-native microbes by ships and other vectors. There is great public concern about the quality of recreational waters and the safety of drinking water sources. Our lab is evaluating microbial threats to animal and human health and the Great Lakes ecosystem that might be introduced or translocated via ship ballast water by constructing libraries of bacterial DNA using a next generation sequencing technique to determine if there are bacterial species of concern associated with the exchange of ballast water in the Great Lakes.

Steel sheet pilings used for docks, bridges and bulkheads in the Duluth-Superior Harbor have been reported to be corroding at an accelerated rate not observed at other ports and harbors in the Great Lakes. The corroded steel sheet pilings have an orange rusty appearance characterized by blister-like, raised tubercles on the surface. This pattern of corrosion is consistent with the appearance of corrosion caused by iron-oxidizing bacteria. We are examining the diversity of microbial communities attached to these pilings by sequencing their DNA. We will determine if differences in microbial communities at corroded and less affected sites indicate the participation of specific bacteria in this corrosion process.

Another area of long-term concentration for us is studying the diversity, physiology, and ecology of bacterial and archaeal microbes in Great Lakes of the world. Our lab group and a multi-disciplinary team from other universities are characterizing the diversity of bacterial communities on particles in nearshore areas. We are evaluating whether fundamental concepts of island biogeography apply to bacterial communities found on these particles. Archaeons are procaryotic microorganisms similar to bacteria that have usually been isolated from extreme environments like hypersaline, hyperthermal, and strictly anoxic habitats. We have demonstrated that they are also present in small abundances within picoplankton communities from the waters of all great lakes that we have examined in North America, Russia and Africa. This finding suggests a cosmopolitan distribution of these Archaea in global freshwater environments but very little is known about their ecological roles in planktonic communities, although recent evidence suggests that some archaeal microbes may be critical for oxidizing ammonia in the aquatic and terrestrial nitrogen cycles. We wish to learn more about the physiology and ecological roles of these archaeons.

I encourage dedicated undergraduates and students wishing to pursue graduate degrees to join our research team and help us investigate the ecology of microbes in aquatic environments.