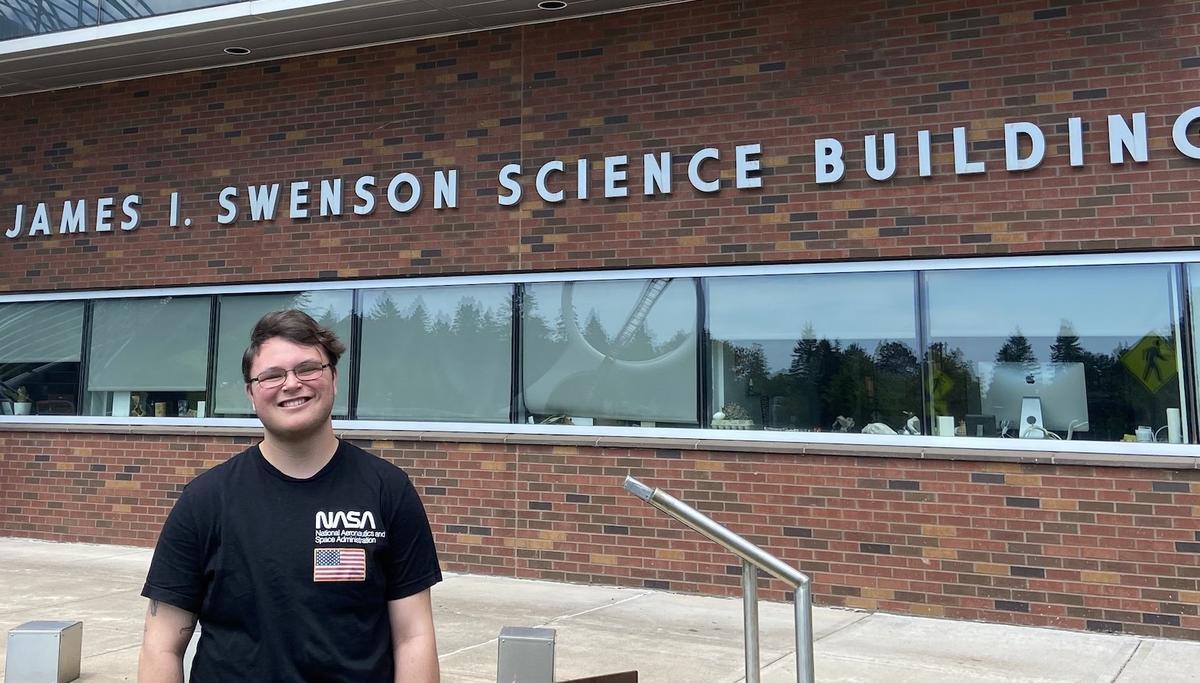 by Eva Moua and Cheryl Reitan

Xeen Meighan is comfortable in the lab room in Marshall W. Alworth Hall. He sits at one of the lab tables in the center of the room, surrounded by a collection of equipment and a whiteboard filled with equations. He works in the field of microfluidics.

Placing his eye on a microscope, Xeen (pronounced Zeen) Meighan picks up a hand-held device that he created himself. He then executes a process that most people would think is impossible. "I control flow rates of fluids in order to create these double emulsions," he says.

Meighan spent the summer of 2022 volunteering his time to work with Laura Adams, an assistant professor of physics at UMD, on microfluidic experiments. He created the devices they could use in related experiments.

The work was challenging and exciting and that led him to apply to the Undergraduate Research Opportunities Program (UROP) program. He's starting the UROP in fall 2022 and is already working on a academic poster for a UROP event.

The field of microfluidics is cutting-edge technology. It has emerged in recent years thanks to its application in chemistry, biology, medicine, physical sciences, and other areas. 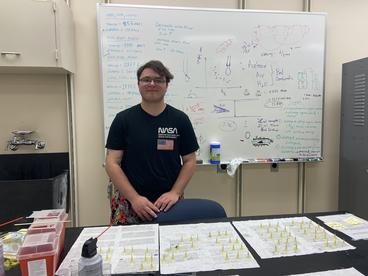 “Fluids behave in a unique way at a very small scale,” says Meighan. The drops are formed by supplying fluids through small capillaries. These drops are typically 100-200 microns in size. “At that scale, forces such as surface tension have greater effects,” he says.

"Xeen is working with nonspherical double emulsions," says Adams. "He's very successful in making double emulsion microfluidic devices that we use in our experiments and he is getting really novel results when running them," says Adams. "They're the best devices I've seen with really cool outcomes."

Meighan finds the projects challenging because the results aren't obvious. “There’s no way to predict when it will work,” he says.

The purpose of the UMD research is to find stable droplets. There are many, many applications. For instance, different types of fluid can be inserted into a droplet, and that will allow a chemical reaction in a small controlled level. In cases of pharmaceutical use, it may work for certain patients to get medication that wouldn’t be possible any other way.

Meighan is a senior at UMD and a recipient of the Physics Department Scholarship in Honor of Dedicated Faculty. His major is physics, and his minors are math and astronomy. “I find the world interesting, especially outer space and math,” he says.

He sees many rewarding paths ahead of him, and he isn’t sure he will choose only one. The opportunity to do research in astronomy is a possibility. Continuing with microfluidics research and observing the progressions that will follow also intrigues him. “I want to learn something new and teach people about it,” says Meighan.

He definitely wants to “pop out a paper for grad school” as publishing will help him get on the path to his career.

What keeps Meighan going is “continuing to beat the odds,” he says. “I’m the first one in my family to go to college.” Freshman year wasn’t always easy, and he said it took him time to “shake off some self-doubt.”

Now he approaches each class with a new attitude. He tells himself, “Wow, that’s really hard, but I can do it.” His first physics class was difficult, but it didn't stop Meighan. “I was okay with being confused because it is a difficult subject."

Challenging classes, encouraging teachers, and success in research is a great formula for Meighan. He’s looking forward to getting his baccalaureate degree in 2023 and moving on to graduate school.

About the UMD Department of Physics and Astronomy