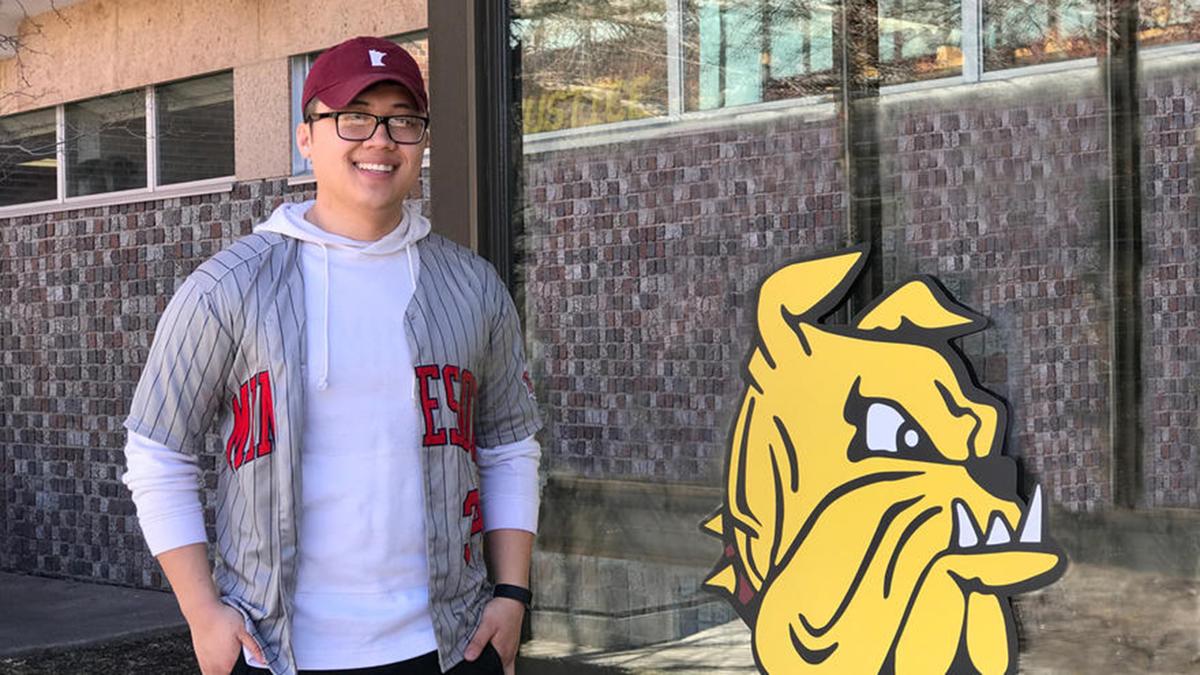 Scott Yang combines civil engineering and culture while at UMD.

UMD civil engineering student Scott Yang came to the career fair with a plan. He walked in to see tables of potential employers filling the Kirby Ballroom for the spring 2019 Career Fair. First, he was going to do a trial interview with Kimley-Horn & Associates, a planning, engineering, and design consulting firm before heading off to the Civil Engineering department area to talk to the Minnesota Department of Transportation (MnDOT), the company he was interested in.

He admits he arrived nervous. “I thought that if I talked to Kimley-Horn as a warm-up, I could talk to MnDOT and feel a little more confident.” Scott says. Things turned out very different. “Meeting with Kimley-Horn went really well,” Scott says. “I talked to an alumna who graduated in 2017, and she really took the time to ask questions. We had really similar focuses in civil engineering. She seemed interested in me as a person and made me want to work for them.” Even after meeting with MnDOT, his eyes were set on Kimley-Horn.

A few days later, Scott received an email from Kimley-Horn to do a phone interview and was later invited back for an in-person interview at the Kimley-Horn St. Paul office. The interview turned out to be three hours long. He had to drive down to the cities on a school night and drive back up the following day after the interview. “It was one of the longest interviews I’ve ever had, but I enjoyed it a lot because they took the time to get to know me. They really put in an effort to get to know their applicants. I liked that.” Scott says.

Four days later, as he was driving with the students from the Asian Pacific American Student Association (APAA) to the Midwest Asian American Students Union (MAASU) conference in Boulder, Colorado, he got a call. It was from one of the Kimley-Horn human resource people saying they wanted to hire him.

“I was freaking out and everything.” Scott says. He had been really tired, but after the call he told the other passengers in the car about the interviews and how excited he was to accept the position. Four days later he accepted their offer and will be starting on June 18.

Scott is also an active member of the Asian Pacific American Association (APAA) and UMD's Multicultural Center. Although these two parts of his life seem to be very different, they still overlap.

Being involved with APAA has played an important part in Scott’s college career. Before attending UMD, Scott had prior knowledge of APAA because of a family trip to see the APAA Annual Culture Show in 2007, when his brother was president. “I remember being in the Ballroom and seeing the performances,” Scott says.

Scott was president this past year but has been a part of the APAA executive board for a total of five semesters. “I became president in May 2018.” says Scott. “Before that, I was the freshman representative in 2014 and a student leader in the spring of 2018.”

“I love this club, I love everything about it. That’s why I spent over half of my time at UMD here on the board,” says Scott. “I find that it’s a comforting place to be.”

Some of his favorite memories include the 2019 Culture Show, which was his favorite because it was his first time running and leading it as president. “It went way better than we expected, and it had a message and we delivered it well,” Scott says. "The message was 'This is Us,' and it included students from all different backgrounds with a main focus on acceptance and love. It was a good way to cap my year as president.”

Making the Best of College Life

In addition to APAA, he’s played and captained intramural soccer every semester. He also studied abroad in Belize during the summer of 2017. From May 2017 to December 2017, he had an internship with Braun Intertec Corporation and continued the internship again during the summer of 2018. His desire to be adventurous will take him to Iceland for a week in June, just before he starts the new job.

“I’m excited to graduate. It’s been a long time,” says Scott. “I’m excited to leave, but I’m also sad because it’s kind of the end to my youthful days. I’ve had a lot of good memories with APAA, my internships, and people.”

About the UMD Civil Engineering Program