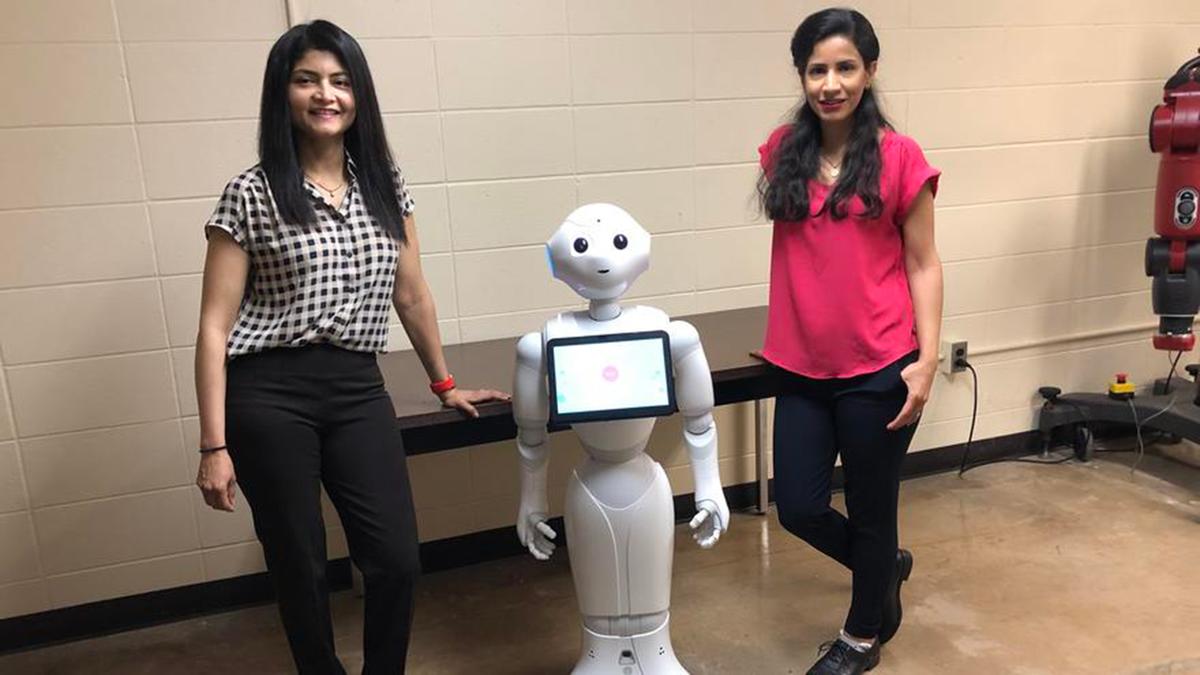 The effect of nursery rhymes on the brain waves of older adults.

Several participants sit in the hall of UMD’s Voss-Kovach building waiting for the experiment to begin. All over 50 years old, they are recruited to be part of a scientific research study. A name is called, and a man steps forward. A student straps a wristband sensor on the man and after a short wait, the man is seated in another room. Suddenly, a robot, bright white and about waist high, lifts its head. Then, the robot begins to sing.

The robot’s name is Pepper, and although she does not have a mouth, the soprano sounds she emits are melodic and upbeat. She waves her arms, gesturing in time to the song. Her fingers move individually, and she nods her head expressively. She dances.

The participant listens carefully, smiles, and begins tapping his foot. He’s hearing the old nursery rhyme, “Here We Go 'Round the Mulberry Bush.” It is clear that the tune is familiar to him.  After hearing five songs, while still connected to sensors, he is given a coloring book and colored pencils. Finally, he is asked to fill out a survey.

From Concept to Study

The brain waves of nearly sixty participants were recorded in this study, and Dr. Arshia Khan, professor in the computer science department, was delighted. She dreamed of doing a study like this one when she first came to UMD. The concept came to her after seeing a video about neurologist and writer Dr. Oliver Sacks and his theories about dementia patients and music.

Several years went by before Arshia's idea grew into a full-blown study. She couldn't have done it without faculty from disciplines other than computer science. The project took off when Arshia talked to Rudy Perault, a professor and orchestra conductor in the music department. He was eager to join the team and helped Arshia take the concept of the study through several revisions. As a result of Rudy’s input, the study ended up measuring the effect of nursery rhymes on the aging brain using an electroencephalogram (EEG) to track brain waves.

A graduate student, Mahsa Soufineyestani, was also excited to join Arshia. Mahsa even switched her thesis. She went from a project on foot sensors, to charge full speed ahead into the uncharted territory of brain waves.

Mahsa's first assignment was a review of the literature. It revealed that a study like this one had not been done before. Mahsa found studies on classical music and dementia, jazz and dementia, and the effect of music and the brain, but she couldn’t find anything about nursery rhymes.

“Dementia patients often suffer from agitation,” says Arshia, “In addition to retaining music, they also tend to retain older memories as opposed to recent ones. The idea behind choosing nursery rhymes is to bring people back to when they were happiest and most carefree. This is often during childhood.”

Arshia explains the importance of choosing culturally significant songs. Since most children grow up hearing children’s songs, the lab chose popular United States nursery rhymes such as  “Twinkle Twinkle Little Star,” “Here We Go ‘Round the Mulberry Bush,” “Mary Had a Little Lamb,” and “You Are My Sunshine.” Every participant knew them.

Mahsa, an Iranian student, also grew up hearing children's songs in her native language, Farsi. She said that even though she did not know the nursery rhymes used in the study, the songs made her feel happy.

While focusing on how music changed brain waves, the team explored different ways of conducting the study before the research began. Some trials used a boombox, others used a live musician. They settled on using Pepper to sing and dance. Rachel Inselman, professor of voice, and a soprano, sang the nursery rhymes on the recordings. The study examined brain waves of the participants while they waited before the experiment, while they watched and listened to Pepper, and afterwards.

“Sometimes, it felt like it was one disaster after another,” says Arshia, “We had to learn from our mistakes. Once, we ran the experiment with a participant and afterwards, Mahsa looked at the sensors and saw that they weren’t registering data. We had void that entire trial.”

There are hundreds of hours of recordings from the sensors. Understanding the data was no small task. Mahsa had to learn about brain waves from the ground up before she could process them on the computer.

“There were fifteen channels of data coming from the sensors,” explains Mahsa, “When participants would blink their eyes, it would register as brain activity. I had to learn how to recognize artifacts like that, and how to exclude them while analyzing the data.”

Despite these challenges, the study proved a fruitful experience. The data is still being analyzed, and it promises prospective treatments for dementia care and research communities. The data will play a role in several papers; the first paper will be a literature review. Three more planned papers will focus on the data analysis. The entire study is sure to direct the lab’s future projects.

Arshia says she is pleased because the work brings meaningful exposure to interdisciplinary research. "This is an important study," she says. "It's a worthwhile learning experience to my students, and it adds to the body of knowledge about dementia and aging."

About the Department of Music

Photo above: Arshia Khan and her computer science student, Mahsa Soufineyestani, with Pepper the robot

This story was written by student employee, Nora Curtis, a biology major with a minor in professional writing and UMD Marketing and P.R. staff member Cheryl Reitan