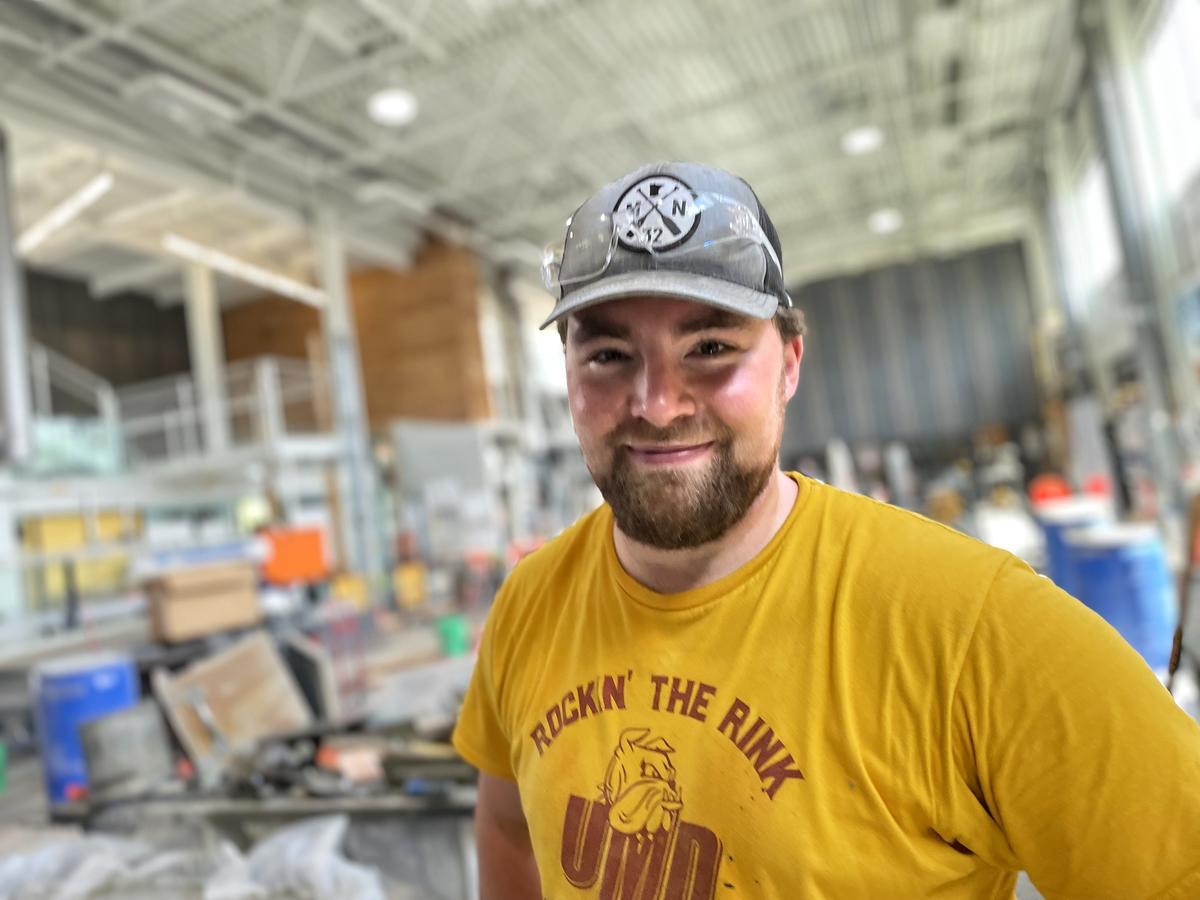 When Austin Janson spreads out his equipment, it takes up a lot of room. It covers nearly one quarter of the space in the UMD Civil Engineering Building High Bay Lab. Different rocks, gravel, and sand stand in neat piles on the floor. Plastic buckets containing additional materials sit nearby cylindrical concrete molds. A red concrete mixer is placed at one end. Janson is finishing up the experiments needed to write his master’s degree thesis in civil engineering.

As he works, adding carefully measured ingredients into the cement mixer, he shares his journey. From high school to college and then to UMD.

When Janson studied physics in high school, he “really liked it.” Next came Saint John's University in Collegeville, Minn. where he majored in physics. He studied the types of forces: friction, electrical, magnetic and more. “I have always been pretty good at math and numbers and I learned a lot about forces, resistance, and reactions,” he said. However, he shifted his emphasis before his senior year of college. “Studying quantum physics made me realize I didn’t want to continue on the theoretical path,” he says. Later his summer job turned the tables. “I got a job pouring concrete at a company called Forterra in Elk River, Minn.

The company made various precast concrete members. “We made box culverts, beams, girders, and similar products. I met a few engineers there and while I worked, I was reminded of formulas from chemistry class and physics principles from school.” When Janson got back to college in the fall, he started applying to get into masters programs in engineering schools.

The decision to go to UMD was made easy after a phone call from UMD’s Manik Barman, associate professor in the civil engineering program. Barman’s area in materials research includes the study of asphalt and concrete materials, fiber reinforced concrete, and recycled materials for roadway infrastructures.

Barman was impressed with Janson’s application. First Janson learned he had been accepted to UMD’s civil engineering program. Janson was really pleased. “But the big deal was what came next,” Janson said. “Dr. Barman offered me a graduate assistantship.”

Two years after the phone call with Professor Barman, Janson is in the High Bay Lab finishing his thesis research. The aim of his project is to determine the suitable synthetic fibers for concrete pavements. He tests fiber reinforced concretes prepared with fibers differing in sizes and other engineering properties. The Minnesota Department of Transportation (MnDOT) and National Road Research Alliance are funding the experiments.

Large steel dowel bars do not fit into thin pavements that are constructed in low and medium traffic-volume roads. “For thinner pavements, like six inches or less, it's hard to put steel in there,” says Janson.

Janson is testing a wide variety of plastics polypropelyne-based synthetic fibers as reinforcing material.“All fibers are not created equal,” he says. “Some are smooth, some stiff, others are embossed or dented,” he says. There are long ones and others are shorter. The data he collects is crucial. "There’s a benefit to determining the better performing fibers and correct dosages,” he says. .

Cement is the ingredient in concrete that is a major contributor to the degradation of the Earth’s ozone layer. Janson’s thesis experiments working use 20% fly-ash as partial replacement for cement.

He is also closely watching the experiments being conducted by his fellow students. “We’re seeing experiments that add 10%, 20% and even higher amounts of alternative materials into the mixtures," he says. ”If used on a wide scale, it would have a huge impact on the environment."

Janson is starting his job search as he finishes his thesis. He sees better concrete formulas as a priority. “Civil Engineers have the potential to improve and create a cleaner world.”

About the UMD Civil Engineering Department