The Paved Road to Success 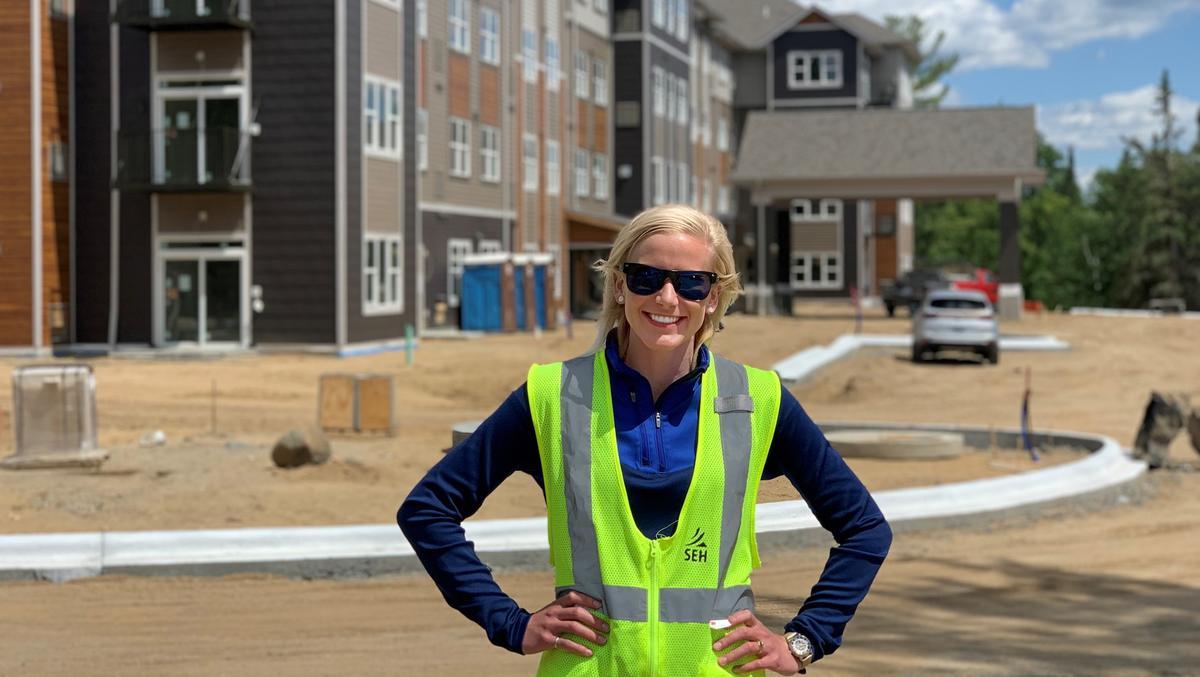 Sara Christenson stood on a Grand Rapids elementary school project site. She was reviewing the finished concrete curbs on the property. “Curb day is the day that's most stressful,” she says. If the curbs don't go right then nothing else will be right. “As soon as the curbs are done you can feel good.”

Christenson is a supervisor, project manager, and client service manager for Short Elliott Hendrickson Inc. in Grand Rapids, Minnesota. She was the lead manager and created the civil sitework development for three new Grand Rapids area elementary schools that opened in the fall of 2020. One site, Great River Acres (West School), started with forty acres of woods. None of the utilities or resources to maintain an elementary school were in place.

She started with a “dizzying range of possibilities” at the elementary school site. It began with mapping the land, creating space for the school, grading the contours, and designing utilities. The next details included creating a huge loop for cars for the pick up and drop off of children, creating handicap accessible areas, strategizing how to get buses to enter and exit efficiently, and designing playgrounds and soccer fields that were accessible and affordable. She also worked with landscape architects to complete the outside of the building.

When it all came together, “It was the best feeling in the world,” Christenson says,  “When I see the product at the end, I know I’ve contributed to something,” she says.

UMD and A Degree

Before choosing the University of Minnesota Duluth, Christenson, an International Falls native, knew she wanted to stay in northern Minnesota for as long as she could. One weekend, she visited friends who lived in Duluth and she was able to explore the area. She enjoyed her experience and ultimately decided UMD was the school for her.

Growing up, her dad was a project manager for a plumbing and heating company. Her dad was a role model for her in the construction field and she always knew she wanted to go into one area of engineering. At first she tried mechanical engineering but “quickly shifted to civil.”

After graduating, she took an internship at Minnesota Power where she was taught various project management skills, as well as underground maintenance charting, surveying, and more. Then, a fortunate event occurred. A position opened up at Short Elliott Hendrickson in Grand Rapids, where her husband currently lived. She applied and got the job.

“Transportation engineering is interesting and enjoyable,” says Christenson. She was taught surprising lessons at UMD. “We learned that school is not just about knowing how to do things, but it's also being able to talk to people, residents, committees, and [government] councils. It took a little while in school for me to realize that,” she says. As a professional civil engineer, communication goes a long way to completing a successful project. There’s always an end product and when all the parties involved can express their needs, the end product is solid.

During Christenson's first years as a female engineer, she took a serious approach. “If you take it upon yourself to treat yourself differently... everyone's going to notice,” she says. Over the years, she proved herself with successful projects and gained the respect of co-workers and contractors. Her advice to others is, "Be yourself, whether you're a female or not.”

Christenson and her husband have two little boys. In 2020, they moved to a house on one of the 1,000 lakes in the Grand Rapids area. Christenson enjoys spending time with family and friends, and having fun. To her, hunting, fishing, or just sitting on a boat are her most enjoyable moments. “Keeping a smile on my kids' faces is priceless,” she says.

Christenson has achieved her goals of becoming a supervisor and project manager. As she goes into her future continuing in civil engineering, she strives to improve and grow in every project. She especially wants to help her clients and the contractors to have an enjoyable time working through the process. And finally one day she wants to retire.

About the UMD Civil Engineering Department