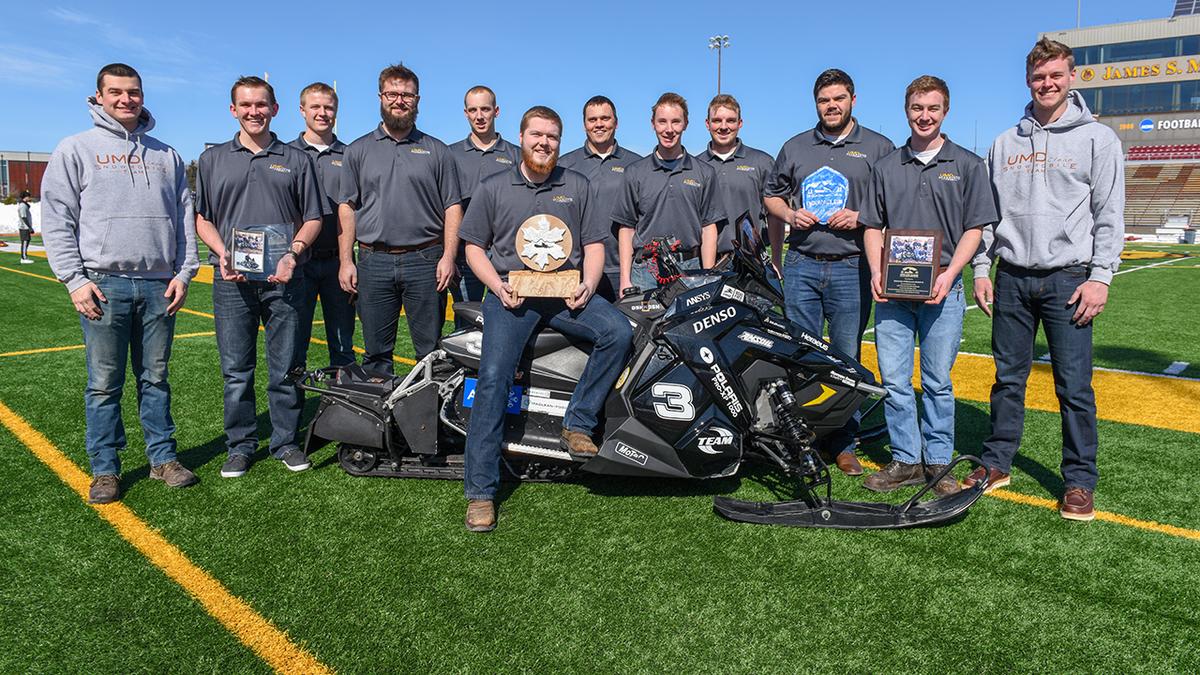 This is the best year yet for members of the UMD Clean Snowmobile Club.

They made it all the way to the number two spot at the recent Society of Automotive Engineers International Clean Snowmobile Challenge in Houghton, Michigan.

The UMD team is made up of undergraduate students that have been putting engineering design and project management skills to work to create a prototype sled that cuts down on emissions and runs quiet. The group received the "Most Practical Solution" award which recognizes the best overall score on the design paper, lowest cost, and best reduction in emissions and sound output.

Seventeen teams from around the world participated in the clean snowmobile division during a rigorous six-day event that included inspections by professional engineers, a 100 mile endurance run, cold start tests, handling and acceleration courses and technical presentations.

“The club has been competing for five years now and this the best finish UMD has had at the competition,” said Team Captain Patrick House.

The work started in September of 2017 when the group received a snowmobile fresh off the factory floor from Polaris. The students then spent the next six months modifying it to compete. House said, “Our new snowmobile design is cost-effective and comfortable to drive - two things judges are looking for in the challenge.”

UMD Mechanical & Industrial Engineering Instructor Jose Carillo is the group’s advisor. Carillo explained the intent of the competition is to create a snowmobile that would be acceptable for use in environmentally sensitive areas such as National Parks. “The organizers of the challenge also make new rules every year to keep it fresh and give the students new engineering problems to work through so they can’t just coast off designs from previous years,” he said.

There are two categories in which teams can compete: gasoline or diesel. For the first time ever, UMD had a team in both categories this year. The diesel team had issues with their sled’s electrical system and was unable to finish some of the events. However, they still took fifth place thanks to their design and presentation.

There are 14 students in the Clean Snowmobile team majoring in mechanical engineering, civil engineering and business. “We’re all in this club to get the chance to apply what we’re learning in the classroom and get hands-on skills that will help us land jobs when we graduate,” House said.