As young girl, Kendall Johnson visited her older brother who was a student at UMD. She strolled through the geology hallway and was awestruck. Below her feet was a colorful map that took up the whole floor, and lining the walls were cases displaying glittering rocks and complex fossil samples.

“I used to collect rocks growing up,” Kendall says. “I was fascinated by the shapes and colors.” As she got older, she organized them into categories. She showed off the sparkling pyrite quartz and colorful sandstones to her friends. “Rocks are so mysterious. They hold the secrets of the earth’s history,”  she says. 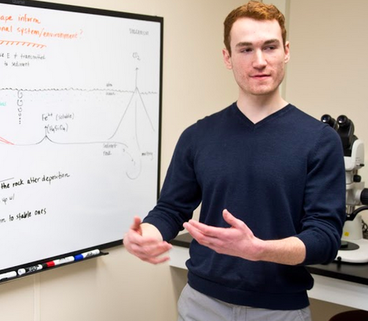 That moment of wonder would stay with her. It inspired her choices in life, and ended up bringing her back to UMD after high school.

Kendall, now a junior at UMD, and Anthony Wetzel, a senior graduating in May 2018, are both doing undergraduate research opportunity projects (UROPs) centered around the 1.9 billion-year-old Mesabi Iron Range. They will present their findings at the UROP fair on April 13, 2018.

Both of them are working under the guidance of Assistant Professor Latisha Brengman in the Department of Earth and Environmental Sciences in Swenson College of Science and Engineering.

“This is a unique place to study iron formations since we are so close to the Iron Range,” Latisha says. “You can look at how it progressed throughout the entirety of its history instead of just a snapshot.”

Anthony has been studying the chemistry of these rock formations since the summer of 2017. His research starts with the fact that the only living things on Earth 1.9 billion years ago were microbes. And, at that time, the Iron Range was located beneath an ocean. These microbes would live in iron-rich sediments in the ancient shallow sea, and when they died, they became preserved in the sediments that eventually became the rock we see today.

Anthony is focusing his study on these iron-rich sedimentary rocks which tell the story of how the ancient ocean evolved. By analyzing the chemical composition, he is helping determine what was occurring in the environment billions of years ago.

“The idea is to try and tease out how the sequence of events transpired [in the ocean],” Anthony says.

While Anthony’s UROP is focused on the chemistry of Iron Range rocks, Kendall’s is about the physicality of them.

She has been measuring the grains preserved within chert, a type of sedimentary rock also known as flint. She uses a microscope and ultimately wants to discover why those textures come in different sizes.

“Kendall’s work informs this model of how these grains are being moved and transported,” Latisha says.

The Lure of the Continent’s Center

Anthony, Kendall, and their teacher, Latisha, have all been called to work with this ancient geological formation. “When I was working on my Ph.D., I attended a field trip by UMD geology professor Richard Ojakangas, and I was fascinated,” Latisha says. “I got to know UMD’s strong geology department and their work on the continental shield of North America.”

Latisha explains that Iron Range sedimentary rocks are some of the oldest rocks anywhere on Earth and represent what used to be an ancient ocean.

When an opening in the UMD Earth and Environmental Science Department came up, she applied and was hired. "Being able to work so close to these ancient terranes is ideal, and investigating questions like how Earth's nascent oceans evolved has always been a dream. This is work I really love to do."

The Past and Future

Kendall is from Moorhead, Minnesota, and Anthony is from Lakeville, Minnesota. Anthony is this year's recipient of the Kenneth E. Differt Scholarship and the Harry T. Kase Memorial Scholarship. Both are transfer students. Kendall originally went to school at the College of St. Scholastica to study physical therapy. However, she realized she should follow the passion she’s had for geology since she was a young girl. She transferred to UMD.

These two student researchers are receiving degrees in geological sciences, and Kendall is also minoring in French. They both hope to continue their love for geology by attending graduate school after graduating UMD.

“Hopefully, as soon as I graduate, I want to go to grad school,” Kendall says. Her overall goal? She wants to research and teach students like her mentor, Latisha.

Anthony wants to take a different route by pursuing international and environmental security. To help reach that goal, he has been applying to grad schools in Moscow and St. Petersburg, Russia.

“In the future, I want to focus on policy instead of the hard sciences,” Anthony says.

The two students have taken their love and passion for geology and have turned it into research that will help people learn how the Mesabi Iron Range was formed.