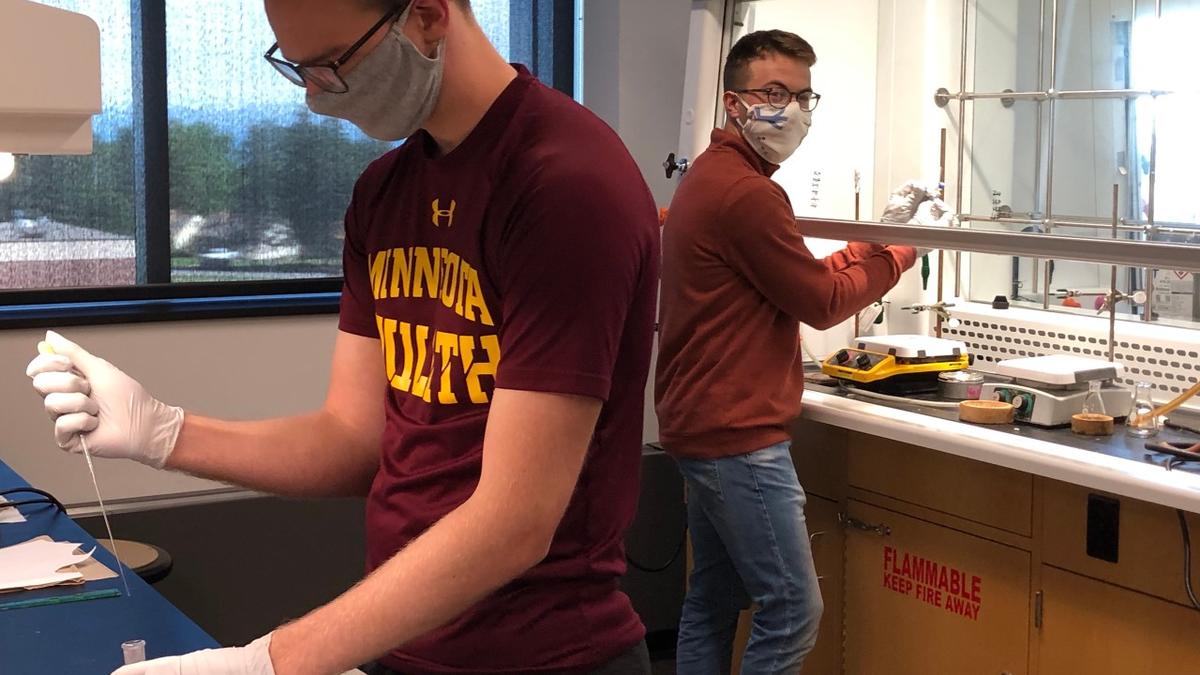 Students work on low-toxicity iodine compounds as building blocks for medicine and industry.

Chemistry student Gunnar Frahm was in the lab on the third floor of the new Heikkila Chemistry and Advanced Materials Science Building. He was deep in a series of experiments working with iodine compounds, a project spearheaded by Viktor Zhdankin, professor of chemistry and biochemistry.

It was late July 2020. Frahm was testing the reactions of iodine compounds, and he saw some unusual results. The molecules in his experiment behaved in a way he hadn't expected. He cleaned the equipment and ran the test again. He took some measurements on the another piece of equipment, a Nuclear Magnetic Resonance spectrometer and saw the results verified.

He called to Akira Yoshimura, the lab senior research advisor, for assistance. Under a watchful eye, Frahm cleaned the equipment using a different method and ran the test for the third time. There was no difference.

Above: Chris Huss and Gunnar Frahm

The two carefully cleaned the equipment a fourth time and ran the test. When they realized they had duplicated the unusual results for the fourth time, they understood they had created a new compound, one that may have valuable applications.

"I was in disbelief,” says Frahm. “I was like... that couldn't happen.” He was expecting, like dozens of previous experiments, a carbon-nitrogen bond formation. It turned out Frahm had created a carbon-carbon bond. “We’ve never been able to do it before.”

The result of this one experiment could have ramifications well beyond UMD, and it is almost certain to change the direction of Frahm’s research.

Another UMD student, Chris Huss doesn't have a dramatic story but nonetheless, he has made a significant contribution to the work at UMD. He began in 2017, as a sophomore, conducting experiments on iodine compounds, and is now preparing a manuscript, consisting of hundreds of pages, as the culmination of that work.

He’s also working on his thesis on another hypervalent iodine compound. He plans to graduate in 2021 with a masters degree in chemistry. It's been a long and rewarding journey. Huss began his work in the 70-plus year-old Science Building and is finishing it in the new HCAMS facility.

Frahm and Huss both work under Professor Viktor Zhdankin on a specific set of experiments dealing with polyvalent iodine reagents, work which is funded by the National Science Foundation (NSF).

Their work made significant progress in the past two years, resulting in more than 20 publications in scientific journals and 16 presentations at national and international conferences. It also recently received a NSF Creativity Extension (CREX) award of $234,200, which will take the research into June 2023.

Zhdankin’s research, which Frahm and Huss are working on, deals with the preparation and study of new organic compounds of iodine in high oxidation states (hypervalent iodine reagents). These compounds find wide application in organic synthesis and pharmaceutical industry as the reagents for selective transformation of organic molecules.

Specifically, Zhdankin's research is a search for safer iodine compounds to use in the formulation of medicines, in medical procedures, and industrial substances.

Zhdankin says, “Currently, these reagents have attracted great interest because they can be used instead of the common reagents based on heavy metals (such as lead, mercury, or heavy transition metals)… They are non-toxic and safe for the environment.”  Due to their low toxicity, these compounds are likely to become more important in medical, pharmaceutical, and industrial use.

About the UMD Department of Chemistry and Biochemistry