Steven Just stands at the podium at the 2017 American Indian Science and Engineering Society (AISES) Convention in Denver, Colorado. The room at the Colorado Convention Center is huge.

His eyes sweep across the room as he recognizes professionals and mentors from the Nez Perce, Cree Nation, Cherokee, Navajo, Ojibwe, and other American Indian tribes. He sees students he has worked with on committees from universities including the University of Mississippi, University of North Dakota, University of Arizona, and Cornell University.

He tells the group, “I first discovered AISES in my first year of college at the University of Minnesota Morris. It provided me a sense of community,” he says. “I was struggling then — trying to find my way. I know what it’s like to struggle.”

He gestures to the group. “You know what it’s like to struggle.” Murmurs of agreement are heard in the room. “AISES helped me fit in on campus, and I stayed with it when I got to the University of Minnesota Duluth.” 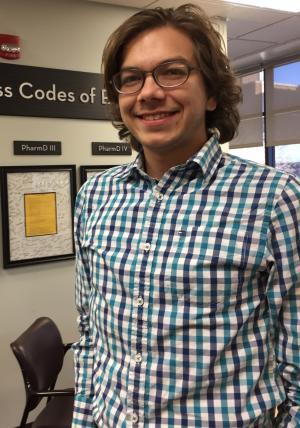 Steven, who is a second year Doctor of Pharmacy student, is staying involved in the UMD chapter of AISES.

He has given speeches like the one in Denver across the country. He is determined to encourage more students to join AISES and more employers and mentors to assist those students. As of December 2017, he has taken on a national role that can give him more support for this work. He is the new AISES Junior National Student Representative. In December 2018, he will become the Senior National Student Representative.

Steven, who is from the small town of Sisseton, South Dakota, is a member of the Sisseton Wahpeton Sioux Tribe. “AISES provided cultural support, academic support and peer support,” Steven says, “I had fellow students who identified as Native American who wanted to do something in science, engineering and health sciences.” AISES helped them all.

From the national AISES conference, to the regional AISES meetings, to the UMD chapter meetings where he is chapter president, Steven doesn’t stop. He regularly visits UMD’s American Indian Learning Resource Center to visit students from all areas of the campus, not just the sciences. He says he appreciates his mentors and he wants to be a mentor to others.

“It's great to know that people believe in you,” Steven says with an earnest smile, “that’s why I stick with AISES and that’s why I do what I do.”