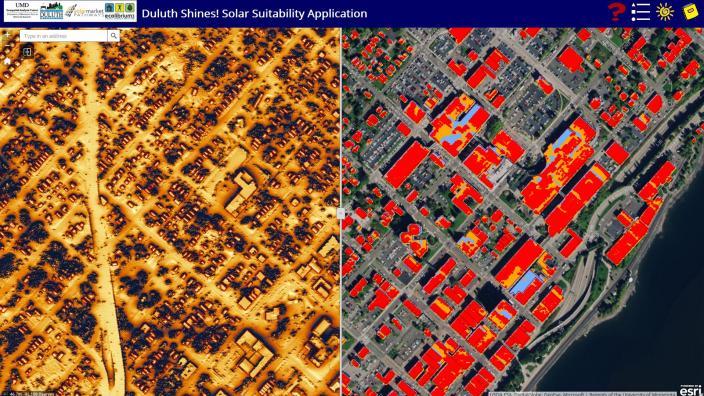 Collaborative project to create a detailed map of solar energy potential for the City of Duluth.

The Geospatial Analysis Center (GAC) at UMD collaborated with Ecolibrium3, the UMN Energy Transition Lab (ETL), and the Midwest Renewable Energy Association (MREA), in partnership with the City of Duluth, the Great Plains Institute (GPI), and the UMD Office of Sustainability to create a detailed map of solar energy potential for the City of Duluth. The interactive web map demonstrates solar potential for the end-user's selected building, as well as provides for a systemic assessment of solar resources for both UMD and Duluth.

In December of 2015, GAC hired 8 undergraduate students from across campus to digitize building footprint data for the entire city (approximately 50,000 structures over 200 sq. feet). Students used aerial imagery (from Pictometry 2011 data at a 3-inch resolution) and GIS software to trace building footprints of each and every building. This allows for precise calculations on available area for solar panels and the corresponding amount of potential energy each rooftop could provide in a year. Local residents can look at the solar potential of their own homes with just a few clicks.

The interactive web map hosts a solar insolation model created by the University of Minnesota, which uses LiDAR (Light Detection and Ranging) data at a 1-meter resolution to calculate the total annual energy in kilowatt hours per square meter per year. This layer is then "clipped" to the digitized rooftops to allow the user to see precisely the potential for solar energy on their rooftop, and, if the location is suitable, inform them on approximate size of the potential system and how to proceed with finding an installer. A link is also be available to a calculator which will determine what percentage of household electricity use could be generated by solar, the system cost estimate for the selected size, and the cost of roof inspection based on the age of the roof.

GAC Director Stacey Stark and GAC GIS Technician Alex Nelson discussed their work on the project at the UMD Solar Summit on April 20, where students, faculty and staff from across UMD presented their research on advancing solar installations on campus. UMD currently has solar panels on Malosky Stadium and the Bagley Classroom, and is looking to increase its solar energy output. $100,000 is available to invest in solar energy on campus, initiated through student service fees.

Solar Energy Potential Map for the City of Duluth project was funded by the Department of Energy, Solar Pathways Project, $21,000; the City of Duluth, $2,000; and the Northeast Minnesota Regional Sustainable Development partnership, $4,995 (2016)