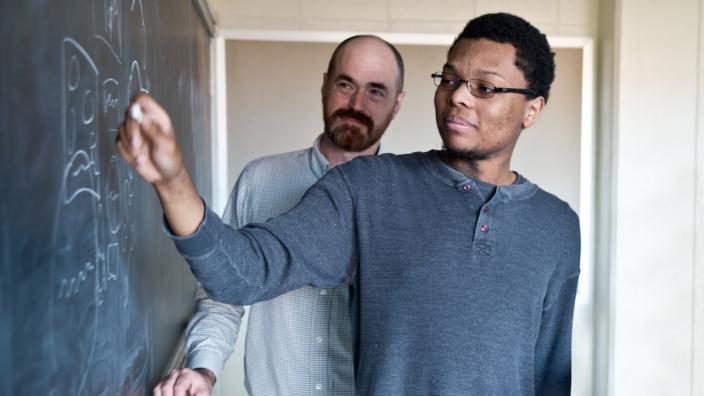 As soon as the video game starts, waves of 2-D bright orange squares and heat-seeking crimson triangles shoot from the perimeter. A deep blue sphere in the center of a virtual room gracefully dodges shapes while a trance-like melody of electronic sounds plays in the background. The game becomes more difficult as the floor turns icy. The timer finishes with the sphere unscathed and the trial is won.

The goal of this colorful, upbeat video game is to avoid collision through a series of puzzle-like scenarios. And it was all designed and developed by UMD computer science major and art minor Charles McGregor.

When he was 11-years-old, Charles knew that he wanted to develop games. “I heard a story about an 8-year-old girl starting a business and thought I could do that too!,” he says. The game developer to-be was fascinated with the way art, music, and gameplay came together to create an experience. He began his journey as a middle schooler when he asked his father to teach him how to code.

“My dad taught me BASIC, and I experimented and learned from there,” Charles says.

Building and refining his portfolio over the years, Charles is now lead and sole developer of Tribe Games, a development studio he founded. It boasts a project list with multiple published titles, including Glitch in the System, the winner of 2015 best audio at Glitchcon, the Minnesota-based digital games festival.

“Video games are the creative melting pot of music, design, and art. When I make them, I am able to express myself creatively,” he says.

His games can be found on the APP store, Google Play, on the Microsoft store, or on his website tribe-games.com.

At UMD, Charles is also working on an app that incorporates video game elements into language learning. Working with Dan Nolan, assistant professor of German (pictured behind Charles, above), Dana Lindaman, assistant professor of French, and other professors, Charles is using his artistic and video game knowledge to develop a French and German language game app that makes learning verb conjugation and pronunciation in the two languages an interactive experience.

In the game, beginners start slowly by drawing a line between a noun and a verb. The game moves faster, and the French or German words get harder as players rack up points. "It's learning without pain," Nolan says. The researchers are confident their game will be a success. The German grammar app they developed in 2015 has already reached thousands, via free downloads.

Charles is contributing to a mobile language learning game development project — MOBLL Group (mobll.dash.umn.edu), and he's been a key contributor to the UMD project throughout, including evaluation in classes at UMD and offering suggestions for research questions.

For Charles, one of the benefits to attending UMD is the ability to diversify his learning. Charles takes art and music classes not typically offered at video game-focused technical schools. He's a member of the Media Arts club and works in the MMAD (Motion + Media Across Disciplines) lab, where students merge advanced technologies with virtual reality. And at UMD, Charles explores "inclusive" games development. "Inclusive games address issues the community feels important," he says.

Charles was also part of a panel last October 2016, held in the UMD Library and live-streamed to the Twin Cities campus, discussing inclusive game development. Incorporating characters with disabilities, diverse backgrounds, and avoiding violence was discussed. The focus was on the importance of developing games that incorporate the needs of the players.

Charles, a St. Paul native, graduates in spring 2018 and has ambitions for a career in game development. Charles has been in talks about publishing his anti-piracy game (featured in the introduction) and is also open to working for another studio. “There are a lot of different avenues to game development,” he says.

About World Languages and Cultures

About Art and Design