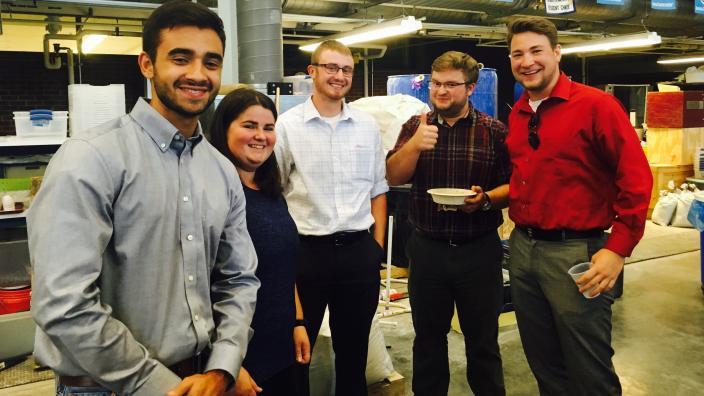 A chilly November wind sweeps across the street and cool air bites the fingertips of Ryan Holritz and his fellow civil engineering students. They are standing on a street corner not far from the UMD campus. They brace themselves against the bitter air as they count cars turning from side streets on to the main road.

The minutes tick by but they don’t give up. They need hard data for their project. They are designing a safe roadway, made from sustainable materials, for one of Duluth’s busiest areas for the mixture of bicycle and auto traffic.

During the Fall 2017 semester, Ryan and his classmates from the civil engineering Senior Design class worked with three transportation organizations to design bike lanes. Their assignment was three blocks on St. Marie Street, stretching from Woodland Avenue to the UMD campus.

Mary Christiansen, assistant professor for the department of civil engineering and the professor overseeing the project, was proud of the work. 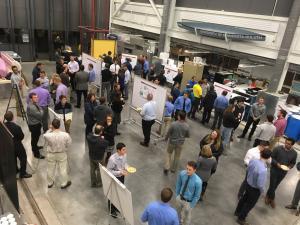 “It was one of the best projects we’ve done in the past four years,” she says.

The project was so successful, their main client, James Gittemeier from the Duluth-Superior Metropolitan Interstate Council (MIC), is going to propose the students’ designs to the Duluth city council. The two other partners, the Minnesota Department of Transportation (MnDOT) and St. Louis County, were also pleased.

“We designed a construction project that’s going to be built in the next few years,” Ryan says. “James was a great client and I’m sure we’ll work with him again,” Mary replies.

The students considered many options. They looked into including green infrastructure such as permeable pavement and a hydrodynamic separator. They decided against the permeable pavement due to high cost and maintenance. They recommended the hydrodynamic separator instead. It is a stormwater management device that removes sediment, trash, debris, metals and nutrients.

Ryan, who will graduate in May 2018, has known for a long time that he’s wanted to be an engineer. He’s specifically known that he wanted to be a civil engineer specializing in transportation. He dislikes traffic congestion. “I’m a very impatient person,” Ryan says. “I don’t like traffic. I want it to flow or else I want to get around it.”

After graduation, Ryan is hoping to get a job with MnDOT doing highway design, as there are many UMD alumni currently working for them. “One of my driving factors is traffic…. We’re always going to have it, but I want to do whatever I can in the near future to make it better,” Ryan says.

He always wants to make things easier for people, and, in this case, he is using his impatience to solve their problems.

About the Civil Engineering Department