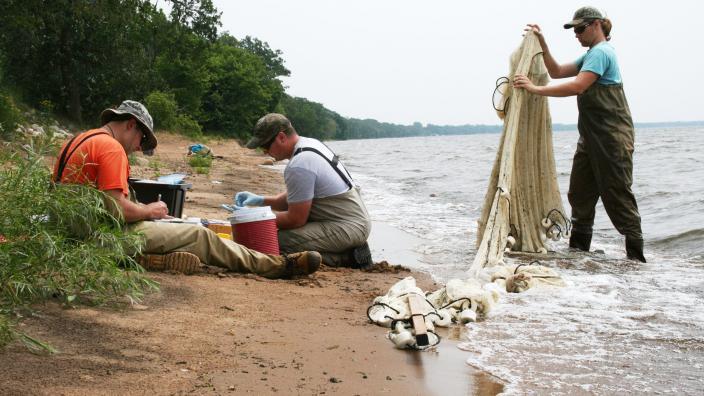 NRRI is beginning a study this summer on the walleye food webs in nine popular fishing lakes to understand if they're impacted by aquatic invasive species.

We’ve checked the boat, drained the water, hosed everything down… and yet, aquatic invasive species are still spreading to our favorite Minnesota lakes.
But not all lakes. Yet. So what can we learn from invaded lakes that will help us prepare for new lake invasions? In particular, will zebra mussels and spiny water fleas affect popular sport fish like walleye in the state’s largest inland lakes?

NRRI aquatic researcher Katya Kovalenko is leading a NRRI research team to understand the impacts of aquatic invasive species on walleye populations. The issue came up during a research needs assessment by the Minnesota Aquatic Invasive Species Research Center. They polled stakeholders ranging from agency managers and researchers to citizen activists. The overall project is led by Gretchen Hansen at the Minnesota Department of Natural Resources to understand the walleye food webs.

So, even though scientists have long documented the impact of zebra mussels and spiny water fleas on the ecosystem, the impact on the ever-popular walleye is not well known.

“I’m interested in the entire food web and how the lakes are changing,” said Kovalenko from the shores of Lake Mille Lacs in July. “But walleye are especially interesting because they are the top predator. They can give you a picture of everything below them on the food chain.”

The researchers are studying Minnesota’s nine largest walleye lakes. Three (Cass, Winnibigoshish and Leech) have varying levels of zebra mussel invasions. Four lakes (Kabetogama, Lake of the Woods, Rainy and Vermilion) have spiny water fleas. One lake (Mille Lacs) has both invaders. And another (Red Lake) has neither. Historical data collected by the Minnesota DNR will also allow for comparisons of walleye populations pre- and post-invasion.

And while the two unwelcomed critters are very different, they both reduce zooplankton, the tiny food source at the bottom of the chain. Reduced zooplankton could mean less food for young walleye and for yellow perch, the food source of grown walleye. The question is: Are walleye adapting to the changes in the food web? If so, what are they eating?

The two-year study is in full swing in the summer of 2017. Funding is from the Environment and Natural Resources Trust Fund in association with the Minnesota Aquatic Invasive Species Research Center at the University of Minnesota.