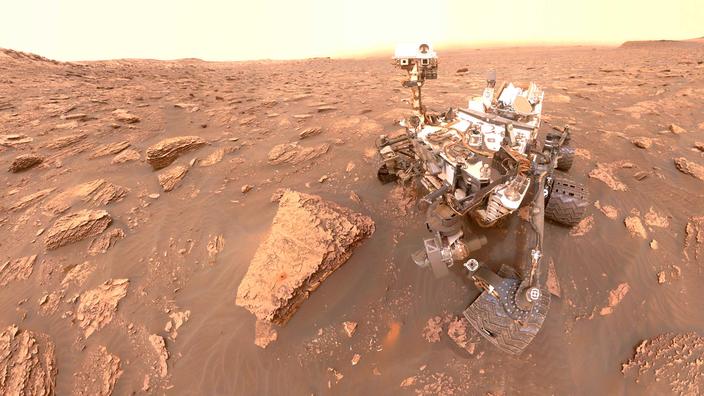 Planetary Scientist Roger Wiens, who named a rock on Mars "Duluth," speaks at UMD on October 10.

Roger Wiens is coming to UMD on Wednesday, October 10 to talk about the exploration of Mars. The talk, entitled "Discovering a 'Great Freshwater Lake' on Mars with Curiosity," will be held at 6 pm in Chemistry 200 on the UMD campus.

When Wiens and the Mars "Curiosity" rover team discovered a three-foot wide rock at a one billion-plus year-old ancient shore of a giant lake, Wiens thought of the Duluth Complex, a large geological formation north of Duluth. He grew up in Duluth and is familiar with Lake Superior. The rock was vital in their exploration of the planet. Wiens named it "Duluth." 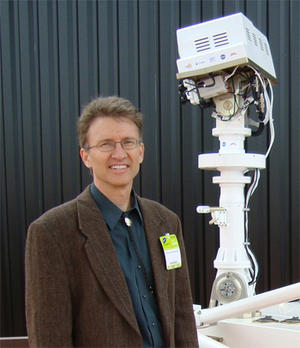 Roger Wiens with the Chem Cam, equipment that helps analyze the formation of Mars.

Wiens is the principal investigator for ChemCam, the laser instrument mounted on the "Curiosity" Mars rover. ChemCam helps NASA explore the surface of Mars. “I started the project about fifteen years ago,” said Wiens in a blog post. “When another co-worker and I told NASA that we could develop the laser concept for use on another planet, they liked the idea. So we recruited a team of scientists and engineers to come up with the ChemCam instrument.”

Currently the ChemCam is studying the rock and soil compositions on Mars. Wiens team was the first to discover that Mars has a history of water when they found pebbles, conglomerates and old sediments in a dry lake on Mars.

The success and accomplishments of ChemCam has led NASA to ask Wiens to create another laser system, this time named “SuperCam.” This instrument will allow Wiens and the rover to explore not just the chemistry but also the mineralogy of Mars. NASA hopes to send another rover equipped with SuperCam in 2020 where it will explore another, colder region of the planet.

Wiens, who is from Duluth, remembers his interest in Mars soared when the Mariner 9 mission successfully orbited Mars. That same year, Wiens and his brother saved enough money from their paper route to buy a telescope to look at Mars for themselves.

Wiens went on to receive his Ph.D. in physics from the University of Minnesota where he wrote his thesis on traces of the Martian atmosphere in meteorites.

Jay Austin, professor and head of the Department of Physics & Astronomy, was instrumental in bringing Dr. Wiens to UMD. He says, "We'll hear about ChemCam, SuperCam, and other instruments. Dr. Wiens will give details about the discovery of organic materials on Mars and what they mean for the past and future of the planet."