Smoothing the Path to Math Between Shanghai and Duluth 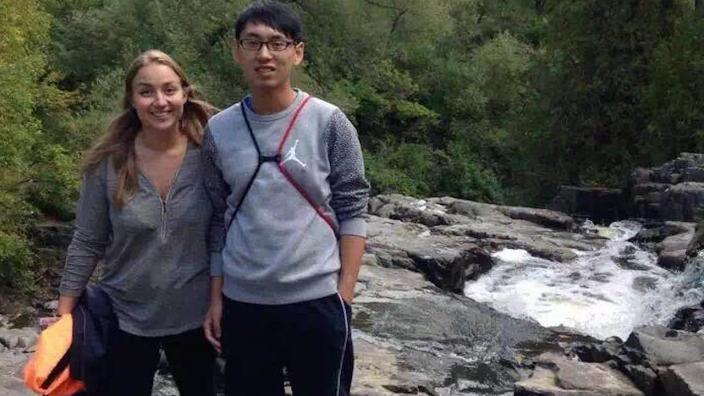 In 2014, UMD’s Professor Zhuangyi Liu traveled to Shanghai to give a research presentation at Donghua University, and as it turned out, he ended up bringing three math students, Yue Yin, Xiang He, and Shuang Li, to UMD.

It all started as a conversation after his speech. Several Donghua University students met Liu in the school math office. They told him about their interest in studying in the U.S. and they asked for advice and help. “Many Chinese students want to study abroad, but there is uncertainty about which classes taken in China will count,” Liu said. “Sometimes, when they get to the U.S., they have to start college all over again.”

Liu, who is a professor and head of the UMD Department of Mathematics and Statistics, reviewed Donghua's mathematics curriculum, and matched a set of mathematics and statistics courses with UMD’s requirements. He then proposed that Donghua University and UMD form a cooperative degree program where students complete two-years of courses in China and pass the TOEFL English test to become juniors at UMD.

The plan worked, and Yue, Xiang and Shuang arrived at UMD in Fall 2015. 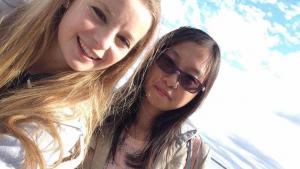 Emily Andrew and Shuang Li became friends when they took the international communication class. Shuang is one of the first three Chinese students in the Donghua University/UMD cooperative degree program.

The three students are having a great time in and out of class.

Xiang He, a math and statistics double major student said, “Dr. Liu is the best advisor I have ever had. He gave me advice about my major courses and some tips about life in the U.S. I would have never gotten used to life in Duluth so fast without Dr. Liu.” 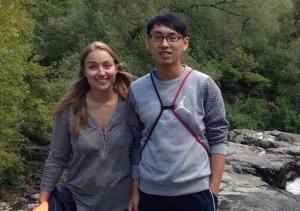 Malin Thorstensson and Xiang He visited Chester Park and Chester Creek in Duluth.

Football and basketball made a difference for Xiang. “I made many friends who love football as much as I do.” Xiang also plays basketball with other students, and he says, "Sports make me feel that America is my second home."

Yue Yin, a math and computer science double major, said she had very good experiences with math classes at UMD, and she plans to find a job in the U.S. after graduation.

“The classes here are very small and professors use excellent applications and methods to teach the class," said Yue. "Concepts are easy to understand, and I love the math labs at UMD.”

All three of the first math exchange students took the intercultural communication class in Fall 2015.

Shuang Li double majors in math and statistics. She shared, “It is my first time to be far away from my family. At first, I was nervous about my choice to come here, but after a semester, I fell in love with this city!” In the Intercultural Communication class, she interacted with American students, African American students, and exchange students from Europe. “I feel like I am more out-going and independent than I used to be,” she said.

Making it Work for the Future

Liu is pleased with the new collaboration between Shanghai and Duluth. Kim Riordin and Chris Haidos, UMD administrators with UMD's international efforts, are playing a big part. “This is our first year,” Liu said. "We are working with the UMD registrar's office to remove roadblocks in credit transfer."

“We are creating a student-centered program,” Liu says. He meets Xiang, Yue, Shuang regularly for one-on-one sessions to help them choose classes and learn more about American culture. Liu also gets advice from the three students about how to make the program better.