Taeho Lim dances around the back deck of the Research Vessel Blue Heron. He tries to keep himself awake by blasting music from a speaker. All around him is Lake Superior, as far as the eye can see. He looks up and stops. The sky is turning green and blue, and Taeho realizes this must be the Northern Lights.

He has to stay awake until 3 am when his 12-hour shift is over, so he turns the music up louder while he waits for his next set of data. 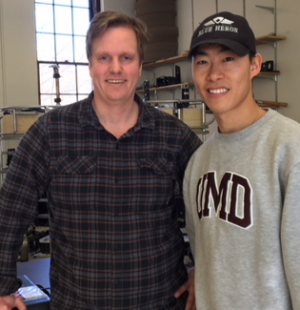 On this research adventure, Taeho, who is a second-year physics graduate student, is helping Sam Kelly, his advisor and assistant professor of physics. It is Taeho’s responsibility to record measurements from a turbulence profiler during the two-week trip. He takes the long cylindrical profiler, hanging from the back of the ship, and lowers it into the water to measure turbulence and water currents.

Taeho is learning a lot about waves from Kelly but he is also working on his own project studying the internal waves of the ocean.

Internal tides are generated from disruptions of the uniform flow of water as it goes over structure on the ocean floor. This mixes the stratified density layers at different depths in the ocean, or "causes dramatic vertical displacements of density surfaces in the ocean interior," as Taeho puts it. Internal waves are three-dimensional in nature, usually about tens of meters in height, but can grow to over hundreds of meters. They contribute to ocean circulation and they can even affect the climate. “More than 30% of tidal energy is going into internal waves. Yet, we don’t know alot about them. We don’t know where these waves are going or how they are moving,” says Taeho.

Taeho is working with Sam to quantify the amount of energy that is going into internal tides at six hours intervals, or at half the tidal period. A basic theory on internal tide generation was developed over 43 years ago by T.H. Bell. Taeho and Sam are trying to extend Bell's theory by considering internal waves at tall steep bumps. They are difficult to measure and involve complex mathematics, but Taeho was ready to rise to the challenge. “When Sam proposed the problem to me, I thought the problem was exciting. We think it can be done,” says Taeho.

By using applied math and numerical simulations, Taeho and Sam Kelly are figuring out potential solutions. First they run the numbers on paper before running computer simulations. They are systematically narrowing down their methodology through the process of trial and error. And they are getting closer.

Studying at UMD and the Large Lakes Observatory (LLO) completely altered Taeho’s career path. He was always fascinated by physics, but when he took a Fluid Dynamics class with Sam, he found waves very intriguing. He was sitting in class when he realized that he wanted to change his focus of study. “Waves . . . this is it. I’m going to study waves,” Taeho remembered.

Taeho is completing his master's program this May. He will go on to get his Ph.D. and is aspiring to eventually become a professor. He hopes to continue to study waves and do oceanic research.