On Saturday, August 4, from 10 am - 5 pm, the Research Vessel (R/V) Blue Heron, with a scientific team from UMD's Large Lakes Observatory, will dock at Milwaukee's Discovery World, taking a short break from a research expedition funded by the U.S. National Science Foundation. 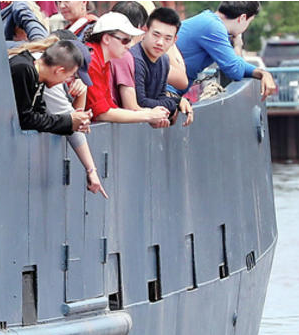 The public is invited to tour the Research Vessel (R/V) Blue Heron and meet the research team. The crew will conduct public tours of the ship and demonstrate the unique scientific equipment in use – free of charge and open to the public.

Large Lakes Observatory researchers, led by Drs. Ted Ozersky and Sergei Katsev, will be on hand from 10 am to 5 pm on Saturday, August 4 to discuss their research on the Great Lakes. The researchers are studying the impact of invasive quagga mussels on the biology and chemistry of the Great Lakes. This year the scientists will work on Lakes Superior, Michigan, and Huron, taking samples of water and bottom sediments and running onboard experiments.

The Great Lakes are key reservoirs for much of the freshwater on the planet. Since 1994, scientists at the Large Lakes Observatory (LLO) have been studying the biology, chemistry, physics, and geology of the Great Lakes and large lakes around the world in order to help understand and protect these invaluable resources.

Changes in the Lake

For example, recent LLO studies of Lake Superior have shown that :
* Surface summer water temperatures have increased by 5°F over the past 30 years, some of the most rapid change observed on the planet;
* Over the past 15 years, the ice cover on the lake persisted only half as long as the long-term average;
* The lake’s nutrient content is changing markedly, with nitrate increasing fivefold since 1900;
* The lake is increasingly affected by invasive species such as spiny water flea

"Our focus is on how the Great Lakes function because this is a necessary foundation for wise management and restoration," says Dr. Robert Sterner, director of the Large Lakes Observatory.

The vessel houses 11 people (four crew, one marine technician, and six scientists) and can be on the water for 21 continuous days. “This is the premier research vessel for fundamental scientific discovery on the Great Lakes with advanced laboratory capabilities, complex analytical equipment, and unique capabilities to collect biological, chemical, physical, and geological data and samples” says Dr. Doug Ricketts, marine superintendent for the Large Lakes Observatory.