Young Forests Are For the Birds 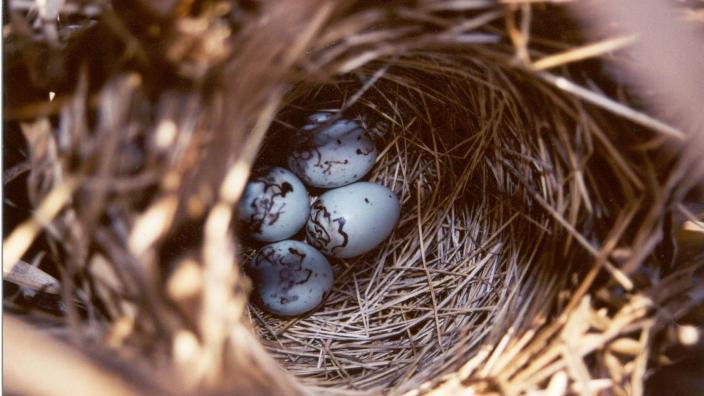 It wasn’t what she was looking for, but noting the presence of the golden-winged warbler was a special treat for Alexis Grinde this spring. Research has shown that this tiny feathered friend is experiencing one of the steepest population declines of any bird species in the past 45 years.

With a yellow cap and eyes masked like Batman, the golden-wing has been designated a "species of greatest conservation need" by the Minnesota Department of Natural Resources. Elsewhere it’s been put on "threatened" or "endangered" lists.

"But there are a lot of golden-winged warblers in here now," said Grinde from a study site in UPM Blandin Paper Mill’s experimental "large plot," about 20 miles outside of Grand Rapids, Minn. The site was harvested 20 years ago and is now considered an early successional forest. "Before the harvest, only a few were detected," she added.

Grinde is a NRRI graduate research assistant and doctoral candidate in UMD’s Integrated Biological Sciences program. Blandin is funding a part of her research to find out what birds are breeding and living in the large, young forest. As a conservation biologist, one might think she’d be at odds with working for a forest products company. Instead, Grinde knows that forest management done right is good for wildlife.

"Large scale forest fires used to happen regularly in nature, but now logging is the major disturbance," said Grinde. "I think it’s important to maintain a diversity of forest structures — young, old and in between. If forest companies can do that in a sustainable way and communicate with scientists about harvest practices to benefit wildlife and ecological balances... that’s exciting."

Grinde and NRRI Research Fellow Annie Bracey have been noting the wide variety of species using the large plot this summer — many ovenbirds, and red-eyed vireos — whose abundance is surprising because they are species that usually inhabit older forests. Also interesting are the large populations of chest-nut-sided warblers and veery joining the golden-wings. And that’s why the research is important, even though flittering birds can be difficult to count.

Binoculars, especially in the thickness of the forest, are limited in what they see. Point counts — listening and noting bird calls — gives more information about who is in the forest, and that work continues. But Grinde’s project goes even further by using mist nets — very finely stringed nets placed strategically in narrow, cleared rows — to gently capture the birds. This allows researchers to identify, weigh, age and place bands on the birds’ legs before releasing. It helps them know if the birds are likely to be breeding age and ensures that they’re not documenting the same birds over and over.

Gerald Niemi, NRRI’s bird research program leader, was working with UPM Blandin and conducting bird surveys on their property in the mid-1990’s when it was decided that this large plot should be cut. Now, 20 years later, the site presents a unique opportunity to follow-up on how the breeding bird community has changed over this period as the forest re-grows.

About the golden-winged warbler