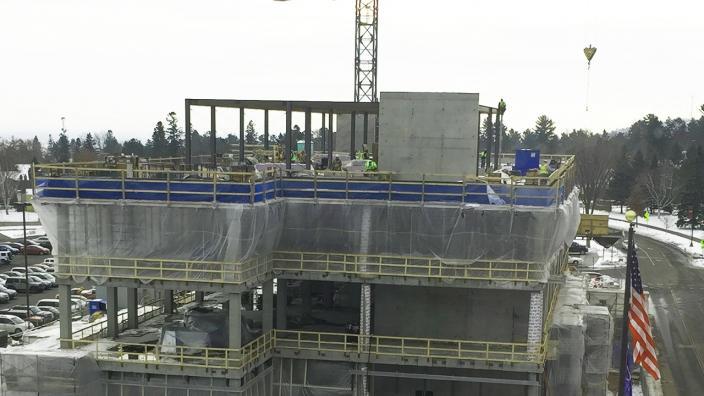 UMD hosting topping off ceremony for its new science building.

UMD is inviting key stakeholders to sign the final beam in the Heikkila Chemistry and Advanced Materials Science (HCAMS) Building before its topping off ceremony on Tuesday, November 14. Participants are gathering in the Darland Administration Building first floor lobby, 1049 University Drive, at 11:15 a.m. before entering the construction site.

The topping off ceremony symbolizes the highest structural member being placed on the building.

John Rashid, Director of Facilities Management, says construction is on schedule and expected to be completed in January, 2019.

The construction manager is McGough, which has a Duluth office, and several of the subcontractors are local. “The local workforce will continue to increase as the project progresses and more trades are involved in the project,” says Rashid.

HCAMS was the University of Minnesota system's top building priority. UMD initially made request for funding in 2016, but the Legislature didn't pass any bonding bills during that session.

In May, 2017 Governor Mark Dayton approved a bonding bill that included $28.3 million for HCAMS and these improvements were put into play:

On new building projects, the University of Minnesota matches a third of the project cost, leaving UMD to find funding for $14.1 million. Chief Development Officer Tricia Bunten says UMD is well on its way towards meeting this goal.