The Science of Problem Solving 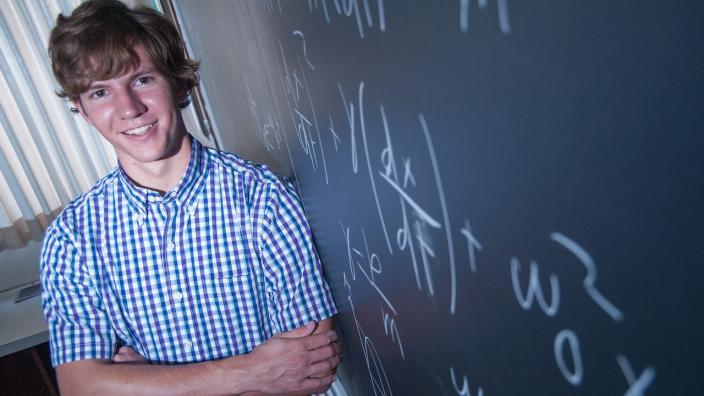 Mark Kallevig merges research and competition with his quest for creative answers.

As the sun sets, Mark Kallevig stands on the UMD research vessel, the Blue Heron. He is surrounded by water with no shore in sight. The UMD junior carefully walks, holding the sturdy sides of the research vessel. At the back of the ship, only two chains separate Mark and Lake Superior’s life-threatening, frigid water.

Mark joined Dr. Sam Kelly on this five-day Lake Superior expedition to collect data for a study of sub-surface waves in Lake Superior. Sam, who’s a professor and researcher with UMD’s Large Lake Observatory, taught Mark’s freshman seminar. He invited Mark to crunch numbers on one of his research projects and when summer rolled around, he asked Mark to come aboard the Blue Heron.

The two start a dusk and work though the night, hauling up a heavy mooring using a winch, all while the boat is underway. They work carefully and efficiently. Time is of the essence because they have a lot to accomplish. Mark and Sam change the batteries, remove the sensors from the mooring wire, and collect the data from the sensors. "It was 3 in the morning before we returned the moorings to the water," says Mark.

The mooring rests 10 meters below the surface. Every two seconds, all year, this mooring, and four more like it, collect the lake’s temperature.

The data is Mark’s focus, but the physical process of gathering the input was an intriguing challenge for Mark. “We couldn’t have everything exactly planned out, so it was cool to see how well we were able to  innovate on the spot,” says Mark.

Back on land, Sam is following Sam's research. There’s a lot of data; and that in itself is a big problem to solve. “There are 50 temperature sensors that record temperature every two seconds for an entire year,” says Mark. "All that information has to be analyzed and themes have to be found."

Sam’s research examines wave patterns. Mark explains it this way, "The moorings gathered the temperature of the water along the thermocline: a thin layer of water with a large temperature gradient of about 39 degrees F at the bottom to 60 degrees F on the top. The source of these waves is unknown, but Sam thinks they may be caused by surface waves hitting the shore, and disrupting the equilibrium of the thermocline."

As we've seen, Mark, a junior in physics and electrical engineering, welcomes problems and he seeks out challenges.

For the last three years, Mark, a junior, has been the president of UMD’s Chapter of Society of Physics Students (SPS). The group seems to like solving problems as much as Mark does. “We order pizza and just try and figure out set problems for fun,” says Mark.

They also enter competitions. Area high school and college students compete in solving theoretical and experimental physics problems in UMD’s Physics Olympiad. Mark made sure he entered the competition when he was a freshman.

“The Olympiad problems take more clever thinking than they do extensive physics knowledge,” says Mark.  In the 2015 round, “I had difficulties with the three written questions at first, but then I had a breakthrough on one of them.” At the end of the time allowed, Mark had chosen one of the questions and solved it.

Turns out, that was all it took for Mark to place first.

Mark and a couple of friends from SPS club recently took on another challenge. They entered the International 2016 Mathematical in Modeling Team Contest. They received three problems on a Thursday night and had 72 hours to turn in the solution to one of them. “It’s kinda' like a take home test, except you feel like you need to be working on it the whole time,” says Mark.

The question they chose was to design a way to get rid of space debris. "It’s actually a real problem because the debris can potentially knock out GPS satellites," says Mark. “We looked at orbits and modeled ways to de-orbit the debris.”

“We didn’t win the international contest, but we had a lot of fun,” Mark says. "We had a clever solution that was well thought out."

Mark's unique approach to learning earned him the Scholarship in Honor of Dedicated Faculty. It's also taken him from contests and school work to research. Mark isn't certain of a career path quite yet. Graduate school and a job in engineering are on the list of possibilities and so is owning a business. Mark is sure of one thing, it will involve problem solving.

For more information, visit the Department of Physics and Astronomy website.