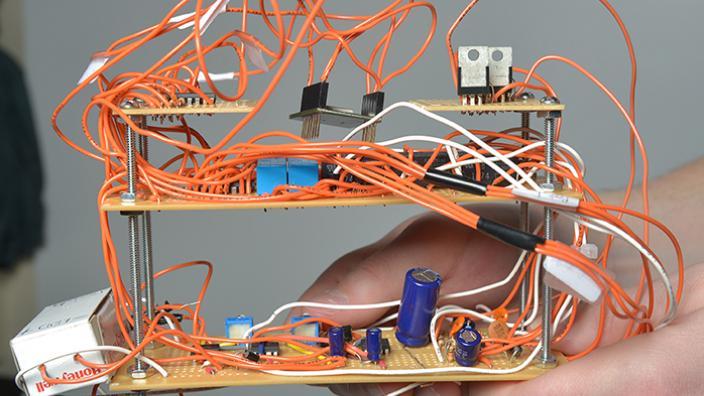 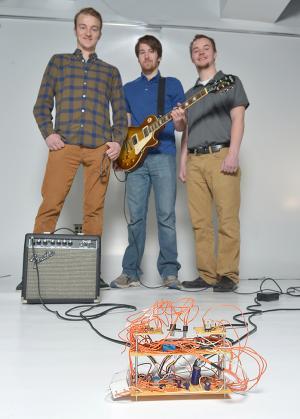 Seniors Nick Robillard, Charlie Farrell, and Miles Pearson with the prototype of their foot pedal app

With the flip of a switch, seniors Nick Robillard, Miles Pearson, and Charlie Farrell surged their innovation superpowers and blasted from student status into the orbit of rock stars.

Inspiration was the song/pause/song pattern that concertgoers endure as guitarists fiddle with their foot pedal, the gadget that provides different effects for their instruments.

Charlie had an idea: Why not automate the process? "I see a lot of guitarists who put little pieces of tape on the foot pedal, but it's still not exact," he explains. "I wanted to create a button so a musician can say, 'Oh, song two. Done."

He started playing with the concept his sophomore year, “I was making single effects with an analog circuit. When it came time to pick a senior design project, Nick suggested bringing it into the app form.”

Making apps is not for the meek, but these seniors performed academic acrobatics with their classes as a safety net. Analog circuitry, programing, and computer architecture taught them what they needed to give it a go. Says Nick, "We came back to every class that we've ever had since our freshman year for this project." Their advisor, Dr. Hua Tang, also served as a spotter, "He helped us quite a bit," Miles says.

They poured this knowledge into their work, connecting currents and figuring out the utility of turning the old "get up and turn the TV channels concept" into a remote- except this one won't get lost in the couch cushions because it's an app.

What separates those satisfied with the status quo, like hefting up to turn the channels, from those who invent improvements? Miles says he's been molded by UMD's electrical engineering program. "Before it was magic. You'd open up a TV, see the insides, and be like, 'whoa!' and now I'm thinking of how I can make it better." 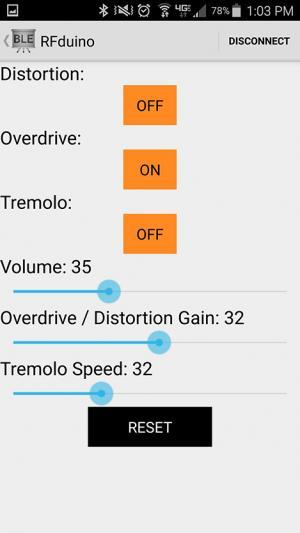 The app and some of its settings

With the app now a prototype, guitarists as innovative as the inventors are the target market. "Pink Floyd would love this," says Miles.

For starters, a guitarist who's been playing since he was six-years-old is ready for his solo– Charlie. He'll demonstrate his team's applied knowledge during the electrical engineering senior design project.

When that happens, the rifts that echo through campus will be audible proof that Nick, Miles, and Charlie chose to fine tune accepted practices rather than become comfortably numb.