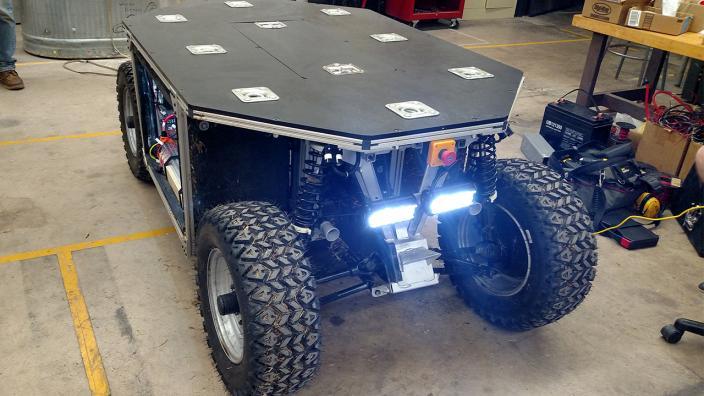 Mechanical and electrical engineering students developed it for the U. S. Air Force Research Laboratory Challenge.

The students are taking their prototype to the grassy area on the north side of Malosky Stadium for a test run on Friday, April 7 at 11:15 a.m.

The test run is in preparation for the United States Air Force Research Laboratory (AFRL) Challenge on Tuesday, April 11 at the Tennessee Army National Guard Training Range at the Arnold Air Force Base. Teams are tasked with the design and manufacture of a resupply device– manually or autonomously operated, controlled or programmed– to haul items on rough and unimproved surfaces during active operations.

UMD is among the invited teams to receive a $20,000 grant to design the device. The vehicle will carry up to 350 pounds and run silent with an electric drive through smooth or difficult terrain for up to two miles with speeds up to 15 miles per hour.

Two teams of mechanical and industrial engineering students started developing their electronic pack mule at the beginning of the 2016-17 school year as their senior design project. They finished the assembly of the prototype machine this Spring semester.

Dr. Emmanuel Enemuoh, professor for the senior design capstone class for the Mechanical Engineering Department, says, "This project presents remarkable multidisciplinary approach to learning environment where professors from mechanical and electrical engineering departments mentor students with one goal of designing the best system to win the AFRL 2017 competition."

They’ve been supported by their advisor, Jose Carrillo, who’s also impressed. “The special part of this effort is the vehicle being operated with wired or wireless operation, including a hands-off autonomous function where the vehicle will drive itself in following the airman where ever they walk or run.”