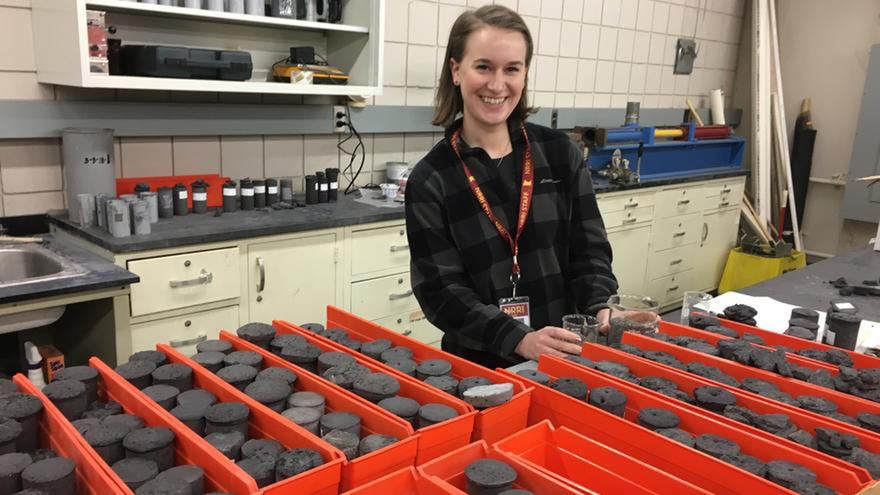 A passion for rocks leads woman to UMD and NRRI to become a multi-faceted geologist.

A summer youth camp to encourage interest in science worked. It got Jackie Drazan hooked on rocks.

“They were targeting minorities and girls, to get them excited about STEM fields, but for me it was just really fun,” said Drazan. “We went all across Texas and New Mexico just learning about geology.”

It made choosing a major in college easy. But it was when she came north to Minnesota for her Master’s degree at UMD that Drazan got to spend time with her favorite rocks – the beautiful and complicated igneous rocks formed by molten magma.

Drazan is now working on her thesis in the Earth & Environmental Sciences Department focused on some of Minnesota’s ancient peperite deposits and Iceland’s modern peperite deposits. Peperite in those two regions formed as the molten magma interacted with water or wet sediments making a unique texture “like if you threw hot oil into water and it splattered, but it’s preserved in the rock,” Drazan explained. By comparing ancient deposits with modern, she hopes to learn more about the mechanisms of how peperites form, adding to the story of how Minnesota formed some 2.7 million years ago.

And then, just to add variety to her studies and earn a bit of income, Drazan took a summer job at NRRI working with Larry Zanko to further develop and demonstrate a road repair product made from waste taconite resources.

“I thought this was a great idea. It turns mining waste into something positive,” she said. “And when I teach undergrad classes, I can talk about ideas for excess material, and get them thinking about the full life cycle.”

She enjoyed experimenting to make the product better, testing efficient ways to deploy the materials and scouting out potholes for demo sites. And before she graduates in May, Drazan hopes to have the NRRI minerals lab in tip-top shape.

Having NRRI’s lead geologist, George Hudak, as an advisor led her to the NRRI job, as well as extensive peperite deposits data both in Minnesota and Iceland. Better yet, to the hidden outcroppings that give geologists a peek at what lies beneath.

“I think it’s good to do a variety of things,” said Drazan. “I really like all aspects of geology. Working at NRRI is a cool way to show I’m a multi-faceted geologist.”