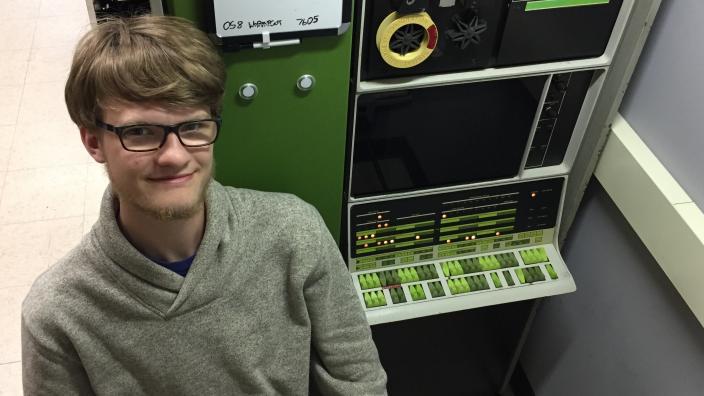 “When I started dabbling with this old computer, I learned more in one week than I did in a semester,” says electrical engineering and computer science student Dawson Rosell.

Dawson is sitting at a console in front of a computer as large as a refrigerator. He consults a manual, walks to the back, and moves a few wires. He sits down again, turns a rusty key in a socket and the computer roars to life. Dozens of lights flash on and off to the sound of bleeps and blips. It could be a scene in a 1960s sci-fi film. “It’s an advanced challenge,” Dawson says. This summer, Dawson is working with Peter Peterson, a computer science assistant professor, to restore and test a PDP-12 computer for his undergraduate research project (UROP). 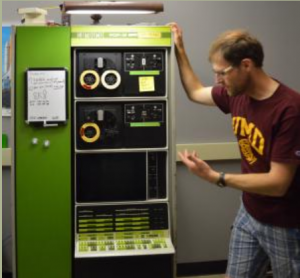 Yonas had kept it dust-free and in near perfect condition for 40 years, along with magnetic tapes, original manuals and a complete set of “as built” circuit plans. Yonas asked if Willemsen “had any use for an old computer.” Willemsen and Peterson teamed up to bring it to Duluth. “Historically, universities have been repositories of knowledge that would otherwise disappear,” Peterson says. “Computers like this are part of computer history. We couldn’t pass it up.”

They also realized the value it had as a teaching and outreach tool. “Computers today aren’t fundamentally different from the PDP-12,” says Peterson, “they’re just thousands of times smaller and faster, with thousands of times more storage. But students can actually see and touch things on the PDP-12 that would be impossible on modern day machines.”

Dawson agrees, “I’m learning electronics on a different scale." He is checking every inch of the computer, inside and out, and repairing or replacing everything that isn't working.

UMD’s Computer Science department will unveil this painstakingly restored Digital Equipment Corporation PDP-12 on Friday, August 11, 2017 from 11 a.m. - 12 p.m. The nearly 50-year-old computer is at 306 Heller Hall, 1114 Kirby Drive. The team has also located a version of the world’s first video game, Spacewar!, and will play it on the PDP-12 during the August 11 demonstration.

Earlier in the summer, Dawson was able to fire up and test the machine himself, but some essential components were missing. Dawson and Peter scoured the country for needed parts and information, making connections with computer museums and collectors around the U.S. in the process. One collector from South Dakota, Warren Stearns, volunteered to come to UMD to lend his expertise — and some missing parts. “People either marvel at computer restorations like this, or they consider it insane,” says Warren.

Other collectors have also donated vintage components in support of UMD’s project. “Restoring a computer from the 1960s is a lot like restoring an old car,” says Peter. “Yeah,” chimed in Warren, “It will get you to town and back, but you might have to change a tire along the way.” Using that analogy, UMD’s team has changed a lot of tires. But thanks to that effort, UMD’s computer is today one of only about five known working PDP-12s and possibly the most functional.

Dawson’s interest in vintage computers sprang from his love for old video game consoles. As a teenager, he reassembled the consoles into handheld devices. He is enjoying his UROP project, but he has many other interests.

When Dawson arrived at UMD, he came in as a double major in electrical engineering and music composition, dropping the music major just one week in. “I didn’t have time for everything I wanted to do,” he says. Though the two majors may seem like they are on completely different ends of the spectrum, Dawson claims the world needs more than science, technology, engineering, and math, the STEM majors. “I’d like to add an A for art to make it STEAM,” he says. He appreciates music and art, and in addition, "creative minds fuel science,” he says.

See Videos of the PDP-12 in action