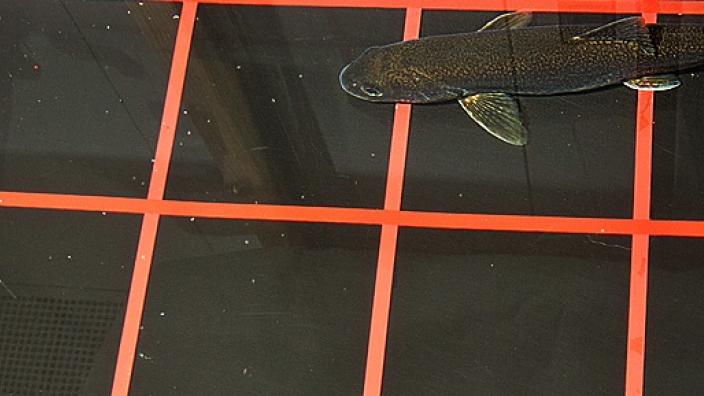 UMD is simulating the pitch-black hunting conditions of Lake Superior to learn more about how the siscowet feed.

Siscowet are a variety of lake trout that largely feeds on small fish at the bottom of the lake. They are visually distinct from the more sought-after, ‘lean’ species of lake trout. “They have a very high percentage of body fat,” Keyler said. “The name ‘siscowet’ is Ojibwe for ‘cooks itself’, because the fish is so fatty that it literally bursts into flames when you try to cook it.”

Caught in the food web
The siscowet may not be popular with the commercial fishing industry due to its inedibility, but they serve an important role in Lake Superior’s food chain. “Siscowet are apex predators. Nothing hunts them in the deep, dark areas of the lake where they live. In turn, they help keep trophic levels, the food chain, in check,” Austin explained.

Learning more about this food chain was the goal of Keyler and Austin’s research. Working under professors Tom Hrabik and Al Mensinger, the pair received funding from Sea Grant and turned lab space in the lower level of Swenson College of Science and Engineering into a dark room, erecting tanks to store research subjects and blue/green LED lights to simulate the spectrum and quantity of light available in the depths of the lake. All that remained was to catch the fish. 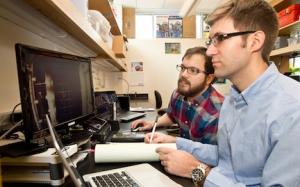 Austin and Keyler examine the data.

Catching and caring for an important fish

“We began our research by sailing out with the United States Geological Survey to catch some fish to study," Said Keyler. "We did bottom trawling, using nets to dredge up fish from the bottom of the lake. We caught both siscowet and their food, small bottom-feeding fish named deepwater sculpin.”

Bringing the fish from the bottom of the lake wasn’t the only step in preparing them for research. The pair of researchers also had to play surgeon to keep the fish alive. “Because they live on the bottom, their bodies weren’t prepared to surface as quickly as the nets brought them up. To keep their swim bladders (which allow the fish to control their buoyancy without wasting energy swimming) from popping, we made a small hole in these bladders and put the fish in a highly-medicated recovery tank, where they lived in ‘intensive care’ for a few weeks.” These tanks were saturated with oxygen and contained medicines, which allowed the siscowet to recover from the stress of surfacing.

Revelations in the dark
After two weeks of living in the recovery tanks, the siscowet were introduced to their homes for the next year: large holding tanks and a research tank inside the darkrooms of the lab. The research tank is marked in a grid pattern, which works with high-tech video software to accurately measure distance in the dark conditions of the lab. Keyler and Austin place fish in a tank with a sliding divider, leaving prey on the opposite side. The pair of researchers then monitor the interactions between predator and prey, mapping out the distance that siscowet can see in varying light levels. What they found surprised them.

“Siscowet can see a lot further in low-light conditions than we thought they could,” Keyler admitted. “They have a reaction distance of up to 50 centimeters in near pitch-black surroundings.” Creating those dark environments, and keeping them practical for research, was a challenge met by cutting-edge technology.

Trout tech
“We put up sheets of black plastic over the entrances to the area of the lab where the fish lived, and wired high definition infrared cameras to monitors in another section of the lab so that we could monitor them without the need for light, or the need for us to constantly move in and out,” Keyler said. “Lee also worked with UMD's information technology staff to set it up so we could monitor these cameras from our phones.”

“It’s like a nanny-cam for trout,” Austin quipped. “Over spring break, we were monitoring the cameras from home and saw some of the trout fighting.” It was a bit of a hassle to visit campus and separate the fish at nearly midnight, but the researchers didn't want to lose their subjects.

The Future of offshore ecosystem research

Now that the pair has studied the foraging habits of the siscowet, they will move on to learn more about their consumption rates. “We’re interested in how much they would eat if they had access to any amount of prey,” Keyler said. "Learning how siscowet respond to an abundance of prey will help illuminate their maximum effect on the food web."

The pair also wants to test other species, to better map out the entirety of the offshore food chain. “Tiny shrimp named Mysis, the lake fish that feed on them, and apex predators, like the siscowet, that feed on both of them. If we can study the feeding patterns and habits of them all, we will be able to better understand the lake’s