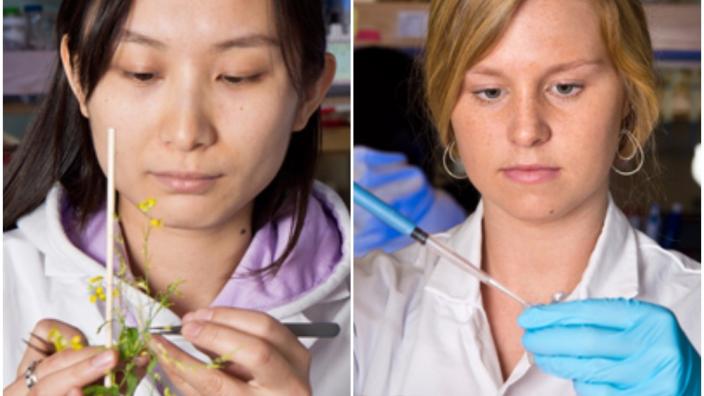 UMD's Clay Carter, associate professor in the Department of Biology, along with his graduate and undergraduate students, are studying the genes of nectar yielding plants to find out how nectar is produced.

Nectar is the sweet, sugary liquid that plants produce and secrete to attract pollinators. These pollinators, animals such as bees and butterflies, then carry genetic material between plants and allow them to breed.

Despite the obvious importance of nectar, the process by which plants manufacture and secrete it has largely remained a mystery.

Carter's project is in collaboration with Wolf Frommer, director of Carnegie’s Plant Biology Department, and the Ian Baldwin lab at the Max Planck Institute for Chemical Ecology in Jena, Germany.

UNRAVELING THE MYSTERY
When Carter started his research on nectar production, there was a short list of genes called the "SWEETs" that were believed to affect nectar production. The SWEET’s were thought to serve a role somewhere in the process, we just didn’t know for sure what they did,” said Carter. “Over the course of our research, we have gained a better idea of what the function of these genes are."

THE SWEETs
Carter's lab primarily works with the Brassicaceae, the mustards and cabbage plant family. They use many different methods to take an intense look at nectar production. “One type of experiment we conducted was a gene knockout,” Carter said. “That is the process of ‘shutting off’ a gene and viewing the effect that has upon a plant.” Another modification made was over-expression, in which a gene is overproduced. This makes the effect of the gene more pronounced than it would normally be and easier to study.

For example, the group determined that SWEET9 transports sucrose, a sugar used to make nectar. "What that means," Carter explained, "is that the SWEET9 gene is needed by the nectaries for nectar production. When the genes governing SWEET9 were turned off, sugar couldn't move. It built up in the plant stems."

EARLY DEVELOPMENT
Their research has been published by Nature and suggests that plant components that make nectar were developed early in flowering plant evolution. These components serve an important role in laying the foundation for the genetic diversity of flowering plants. Namely, robust nectar production prevents many plants from floundering in a stagnant gene pool.

“Because plants can’t move, they developed strategies to spread their genetic information further than their own reach.” Carter explained. “Some, the dicots, developed nectaries, the organs that produce nectar, to entice animals into visiting their flowers. These animals allow them to reproduce successfully.”

IMPACT ON AGRICULTURE
Carter's work has important and far-reaching ramifications. Many of the world’s crops depend heavily upon strong nectar yields. U.S. pollinator-dependent crops alone have been estimated to have an annual value of up to $25 billion. Nearly one-third of all worldwide crops are dependent on animals to achieve efficient pollination, and poor pollinator visitation has been reported to reduce yields of certain species by up to 50 percent. Determining which genes affect nectar production could provide a boost to productivity for these plants and greatly improve the efficiency of farming worldwide.