The Forest of the Future 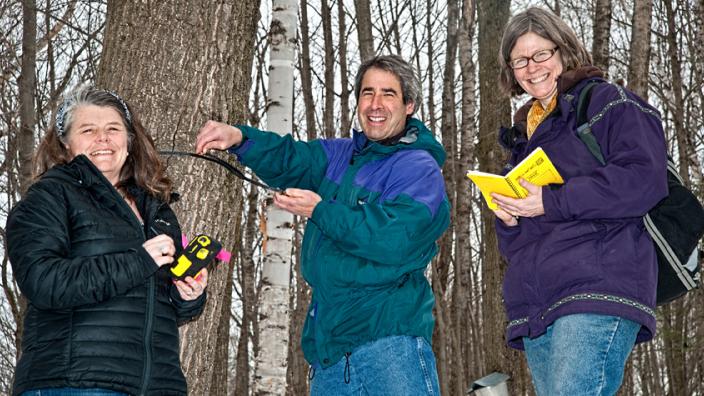 How will Northern forests react as our climate changes and temperatures rise? It’s a question both practical and of increasing relevance, especially in northern Minnesota. A demonstration project to be launched this summer by the University of Minnesota Duluth (UMD) and The Nature Conservancy seeks answers to what, exactly, the forest of the future will look like.

The project is called “Adaptation Forestry in Minnesota’s Northwoods” and it has an ambitious agenda—to plant 88,000 trees on 2,000 acres of land in Minnesota’s north woods.

It's a project that represents a new direction for The Nature Conservancy. Rather than trying to replicate the make-up of the past forest, this project is focused on creating a new species mix.

Mark White, a scientist with The Nature Conservancy, has been working with colleagues at the University of Wisconsin and Portland State University on forest landscape models that project how forests may respond in a warmer-drier climate. The results from forest models and recent research indicate that many of our northern forest species such as quaking aspen, paper birch, white spruce, and jack pine will decrease significantly over the next century. Previously, The Nature Conservancy has used the pre Euro-American settlement forest as a guide for restoration. “We don’t think that the pre-settlement forest model based on northern species is viable in a rapidly changing climate,” he says. The forest from centuries ago is simply not well-adapted to the changing climate.

“Our goal is to create more complex ecosystems,” says Julie Etterson, UMD associate professor of biology. "By planting a mix of native species and using genetic material from a wide geographic range, we will see healthier, more resilient forests.”

Etterson knows genetics. She has used different methods to examine plant species to determine how adaptable they are, whether they’re able to acclimatize, and how their genetic makeup will change in subsequent generations.

“The theme of my career has been to employ as many different approaches as possible to the theoretical question: Can plant evolution keep pace with climate change?” she says. In the past, Etterson has worked primarily with herbaceous plants. "This is a rare opportunity for me to work on trees,” she says.

While the tree species to be planted are native to the region, they are uncommon due to several factors, such as past harvesting practices and the limitations on trees to disperse seeds. The trees selected are also more fire resistant, as well as tolerant of shade and drought.

Of the 2,000 acres in Northeastern Minnesota to be planted, 500 acres will be planted in each of four forest types -- Boreal Mixed (coniferous), Mesic Pine (oak dominated), Dry-Mesic Pine (pine/hardwood mixed), and Hardwood. Planting will take place in recently harvested areas.

Ultimately, the project will tell scientists whether these new forest management techniques can help the millions of acres of forest in the Great Lakes region—forests that are crucial to the ecosystem, the local timber economy, and recreational opportunities—survive future climate changes, and keep Northern forests thriving for years to come.

Partners and Funding
The work is a collaborative effort with The Nature Conservancy, the Northern Institute of Applied Climate Science, UMD, the Minnesota Forest Resources Council and the Sustainable Forests Education Cooperative. It is funded with $ 236,000 from the Wildlife Conservation Society (WCS) through its Climate Adaptation Fund and The Nature Conservancy’s Cox Family Fund for Science and Research. The Doris Duke Charitable Foundation supported the establishment of the Climate Adaptation Fund through a grant to WCS. Critical matching funds were also provided by Minnesota’s Conservation Partners Legacy program and the National Science Foundation.