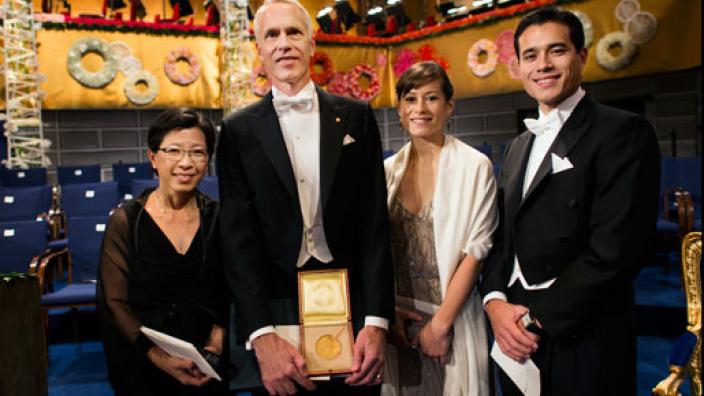 Kobilka received the 2012 Nobel Prize, along with another U.S. scientist, Robert Lefkowitz, for studies about how cells in our body sense their environments. These studies are key for developing better drugs.

Dr. Robert Lefkowitz, of the Howard Hughes Medical Institute (HHMI) in Maryland who shares the prize, is also a professor at Duke University Medical Center in Durham, North Carolina.

About Kobilka's Cell Research
In the 1980s, the two men worked to identify one G-protein-coupled receptor family member called the beta-adrenergic receptor. Kobilka's great feat was to isolate the gene for the receptor to learn more about its composition. In 2011, he and his team were the first to obtain a three-dimensional image of another receptor family member bound to its signaling molecule.

"It was so exciting to see this three-dimensional structure and finally know how these transmembrane regions interact during signaling," said Kobilka.

The Royal Swedish Academy of Sciences said Lefkowitz and Kobilka had made groundbreaking discoveries. About half of all medications act on these receptors, including beta blockers and antihistamines, so learning about them will help scientists to come up with better drugs.

The human body has about 1,000 kinds of such receptors, structures on the surface of cells, which let the body respond to a wide variety of chemical signals, like adrenaline. Some receptors are in the nose, tongue and eyes, and let us sense smells, tastes and light.

The academy said it was long a mystery how cells interact with their environment and adapt to new situations, such as when they react to adrenaline by increasing blood pressure and making the heart beat faster.

Scientists suspected that cell surfaces had some type of receptor for hormones. Using radioactivity, Lefkowitz managed to unveil receptors including the receptor for adrenaline, and started to understand how it works.

Kobilka and his team realized that there is a whole family of receptors that look alike -- a family that is now called G-protein-coupled receptors.

In 2011, Kobilka achieved another breakthrough when his team captured an image of the receptor for adrenaline at the moment when it is activated by a hormone and sends a signal into the cell. The academy called the image "a molecular masterpiece."

Early Years at UMD
In the late 1970s UMD professors Robert Carlson and Conrad Firling collaborated to set up an interdisciplinary program in biology and chemistry for Kobilka. The program was the first of its kind at UMD, and it allowed Kobilka to do interdisciplinary research in chemistry and molecular biology for his honors research project. It was in Firling's class where Kobilka met his future wife, Tong Sun (Thian) Kobilka.

"Brian's contributions have helped the pharmaceutical industry already, and his work is going to have important ramifications for the next 20-30 years as well," Firling said.

KUMD-103.3 FM radio has interviewed Firling and Will Salo, another one of Kobilka's UMD professors. The show will air at 8 a.m. on Tuesday, September 10.
KUMD Audio Clip - Conrad Firling

MPR Story on UMD and Kobilka