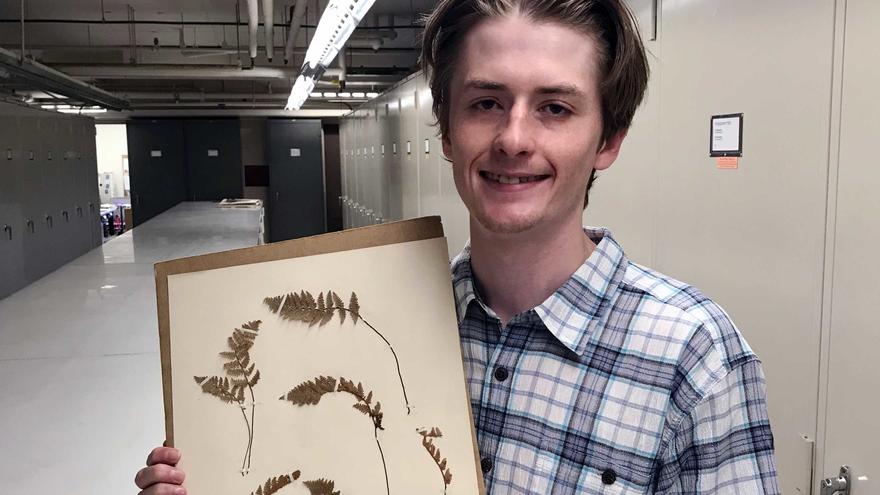 Congratulations to one of the Biology Department's recent graduates Blake Fauskee for winning a 2019 ASPT undergraduate research prize.

The American Society of Plant Taxonomists (ASPT) selected Blake along with two other undergraduate students from around the country. This prize is considered the Society’s most prestigious recognition of undergraduate achievement.

The Undergraduate Research Prize (URP) has been presented annually at the international Botany conference since 2015 for outstanding, independent research projects in plant systematics completed within the last two years.

Blake graduated from UMD in May of 2019 and was part of Assistant Professor Dr. Amanda Grusz' lab. Dr. Grusz is also the Director of the Olga Lakela Herbarium at UMD. Blake's research focused on apomixis in the fern species Myriopteris lindheimeri, a species native to northern Mexico and the southwestern United States. He evaluated genotypic diversity across the range of the species using 10 microsatellite markers from 96 samples.

His findings show that genotypic diversity is higher in Mexico than in populations to the north, near the US-Mexico border. These findings will inform future studies regarding the role of apomixis in M. lindheimeri at the population level.

Blake has also participated in a National Science Foundation funded REU program hosted by The Field Museum in Chicago, where he looked into mitochondrial genome assembly and RNA editing in ferns. In her letter of nomination for this research award, Dr. Grusz noted that “[Fauskee] is a cornerstone of my lab group and will be deeply missed as he goes on to explore new avenues in graduate research."