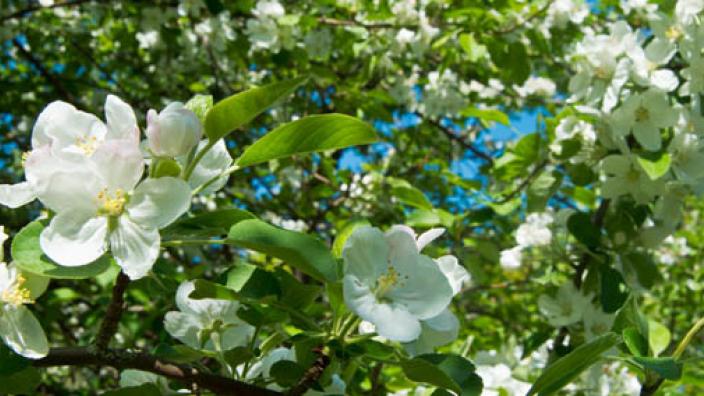 Marshall Wedger, an undergraduate research student studying biology, and his advisor, Briana L. Gross, assistant professor of biology, know that supporting local agriculture helps farmers and strengthens the local economy. In an effort to help restore apple production in Duluth and along the North Shore of Lake Superior, they launched a project to genetically identify area apples.

The project was developed in collaboration with Dr. Cindy Hale, a researcher in local agriculture who also operates her own integrated fruit, poultry, and hog farm. They enlisted community members and orchard owners as advisors. Commercial orchards produce thousands of pounds of the domesticated apple (Malus x domestica) each year. It is a major perennial crop, yet little is known about the history and genetic make-up of these trees. Starting in the summer of 2013, Wedger genotyped, which means documented the genetic fingerprint, of 311 apple trees from community residents, orchards, and trees on public land in the Duluth area. The results were surprising. 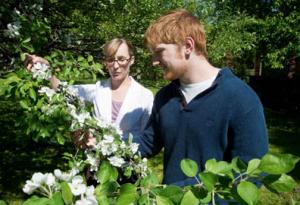 Briana Gross, assistant professor of biology and her student researcher Marshall Wedger have documented the genetic fingerprint of 311 apple trees from the Duluth area.

THE PROCESS
Members of the Gross lab collected leaves donated by interested community members at the Duluth and UMD farmers market throughout the summer of 2013. Most people who brought in leaves for identification had moved into a house with an existing tree on the property, but did not know the cultivar type. Lab members also collected leaves from abandoned trees on public land. Little was known about the history and genetic makeup of these trees, but Gross and Wedger knew identifying the trees could be exceptionally useful for renewing local production.

Back in the lab, Wedger took a leaf from each tree and began testing. "I did the CSI thing," he said. Wedger took small pieces of each leaf and put them through a genetic testing sequence, similar to the DNA testing seen on the popular television show, CSI. "Specifically, I looked at SSR data from nine loci across the genome of Malus  x domestica for each apple I found," said Wedger. He then compared the results to the Plant Germplasm System apple collection in Geneva, NY. The facility is maintained by the USDA-ARS National Plant Germplasm System-Plant Genetic Resources Unit (PGRU), and it has over 2500 living apple varieties maintained as trees in the field.

THE RESULTS
Wedger and Gross identified 71 trees as matches to 17 named cultivars, and 45 more apples encompassing 11 unknown genotypes. They found a significant overabundance of the ‘Haralson’ cultivar, representing 13% of the collected samples. (See list below). The 45 apples of unknown genotypes fell into groups and one group was represented by 11 trees in Duluth! Every person that participated in the study was provided the results of the study. Wedger and Gross also wanted to see if Duluth area cultivars originated from the UMD trial orchard, but no evidence was found to support that hypothesis.

ABOUT HARALSON APPLE
When Wedger and Gross identified 42 of the unknown trees as the Haralson cultivar, they knew it was significant. The Haralson has a long history in Minnesota. The Minnesota Horticulture Research Center introduced the Haralson apple in 1922. Named after Charles Haralson, superintendent of the University of Minnesota Fruit Breeding Farm, Haralson apples are striped red with a greenish-yellow undercolor. Tart, crisp and juicy, they popular for eating, cooking, and in pies. Most significant is their ability to thrive in cold climates, hence their popularity in the Duluth area.

"Obviously, the Haralson is tried and true," said Gross. "It should provide the genetic basis for new varieties that will thrive in Northeastern Minnesota."

WHAT'S NEXT?
The question that remains is how does Northeastern Minnesota compare with the rest of the state. Gross wants to take the study further. "We'd like to look at trees from historical sites around the state," she said. The difference between an apple tree that grows in your back yard and one that can produce apples for large-scale production is huge. "There's a lot to learn," Gross said. "Simply identifying what is well adapted to this climate will help hundreds of farmers. We have the potential to promote local apple cultivation and that would be positive for Minnesota."

In addition, 45 more apples encompassing 11 unknown genotypes were found. One group in the unidentified apple section was made up of 11 different trees in Duluth!

Of the apple varieties identified in the Duluth area, only five (Haralson, Honeygold, State Fair, Fireside, and Mantet) are listed on the University of Minnesota Extension list of 22 apples that grow well in Minnesota.