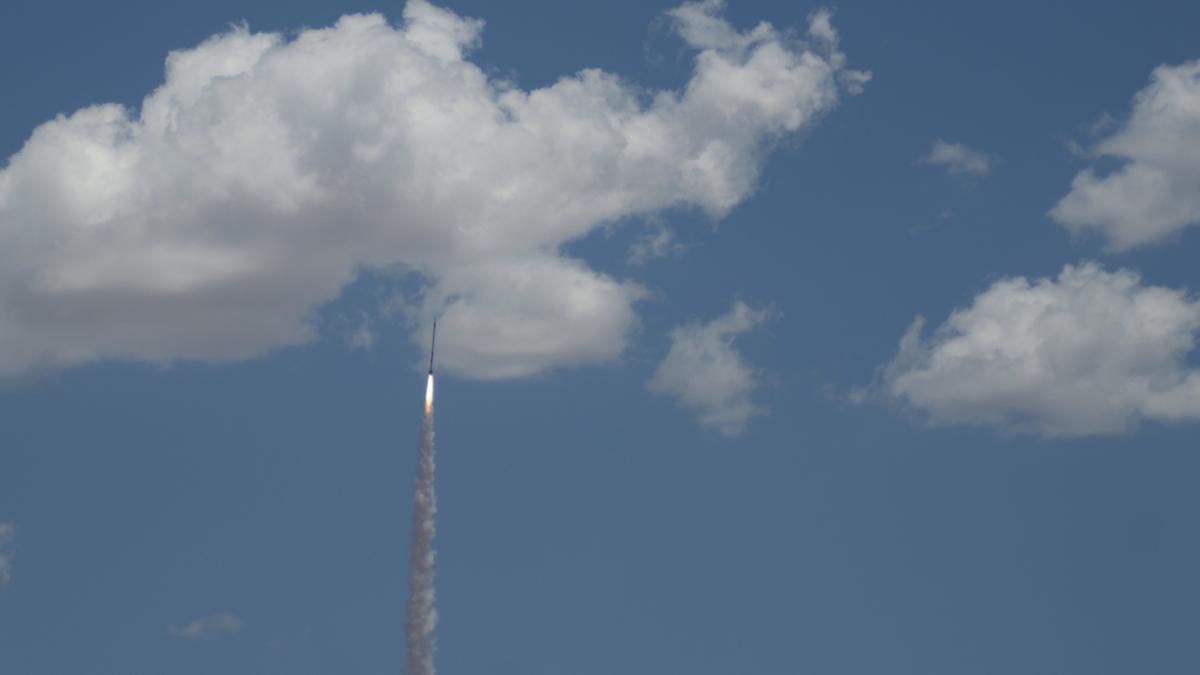 The countdown, 10 . . . 9 . . . 8 . . . 7 . . washes over a crowd of onlookers staring at a scrubby horizon of desert sand and brush, then the rumbling starts and a rocket streaks through the sky. It’s an impressive site and during the nine seconds when the engine burns and propels the Bulldog Rocketry Club’s creation to a height of 22,000 feet, you can’t hear anything else. 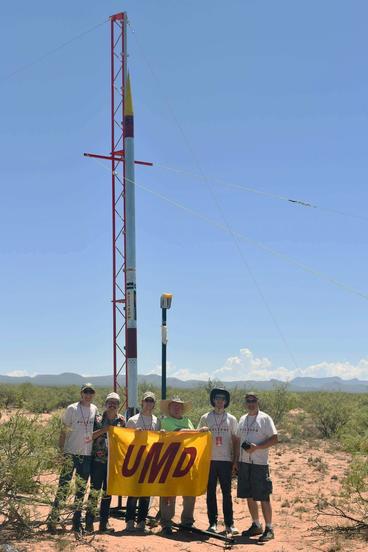 2018 marks the first year that the UMD Rocketry Club competed in the Intercollegiate Rocket Engineering Competition (IREC). Despite being rookies, they placed second in their division against teams representing entire countries like Brazil and Japan!

Rocketry Club Advisor Jose Carrillo said, “We were thrilled to do so well and we were working with a lot fewer resources than many of the other teams. It really showed how hard work and creativity can go a long way. I’m very proud of our team.”

The competition took place in Las Cruces, New Mexico at the Spaceport in June and more than 130 teams participated. They were part of the solid engine division in the 30,000 ft class. According to club member Will Poor, it was “the most competitive category by far”.

Bulldog Rocketry has competed at NASA’s Space Grant Midwest Competition for many years. The team won first place in the 2015-2016 Midwest Competition and scored highest in four of the five graded categories. In 2017, they earned two second place awards for most practical air brake design and most aesthetically pleasing rocket.

Graduating to a new level of competition was a welcome challenge. Last year’s club president Logan Hotek said, “We have the ingenuity and drive to do it.”

It takes two semesters for the club to prepare for competition. The first semester is spent carefully planning and designing, and the second focuses on building and testing a rocket.

One requirement of the IREC is to deliver a payload. Many teams chose to release CubeSats that can record atmosphere data, but the UMD students chose to release a different payload – a deployable carbon fiber folded wing glider. So, in addition to constructing the rocket, the Bulldog Rocketry club and the UMD Robotics team collaborated to build the glider.

Once the rocket was launched by the rocketry team and hit its maximum altitude, the glider was released and controlled by the robotics team from the ground until it landed. The glider collected visual data that could be used for military reconnaissance at the estimated price of only $500 per launch. 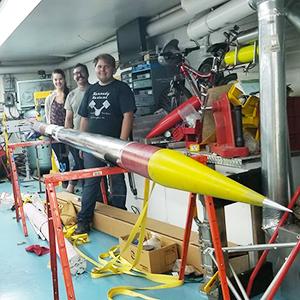 After countless hours of research and hard work the UMD Bulldog Rocketry team created a 20 foot long, 6 inch diameter, aluminum rocket weighing 128 pounds. Every part of the rocket was made by the club, including a 28 foot long, 800 pound launch rail.  The UMD rocket was the largest the competition had ever seen and featured the largest motor at the Spaceport.

Launching something of this size takes considerable effort. The team’s flight crew started prepping their launch site at 3:00 a.m. aiming for a sunrise launch window when the wind would be down and the desert still cool. In the final hours before the launch Martin Anderson, Eric Lawin, Aaron Paulsen, and Evan Schindler, along with team mentor Dave Leininger and advisor Jose Carrillo, made final adjustments and put the rocket on their rail.

The heat was rising quickly as they armed the electronics, double checked all their calculations, reviewed launch checklists, and patiently waited for the Range Control Officer (RCO) for permission to launch.

RCO: "Next rocket to go is from team number 53, University of Minnesota Duluth. Skies are clear. Tracker ready?"

RCO: "Is everyone on the range watching?"

RCO (after verifying that all eyes are on the launch): "Range is go."

You now may arm your launch controller.

RCO: “We have ignition.”

RCO: "Model is coming up on peak. MARK" (this is the point that altitude is taken)

Over the next few days, a total of 96 teams launched rockets. According to Martin, the awards ceremony started with the payload competition and the first Honorable Mention in Technical Design was University of Minnesota Duluth. Then the Solid Motor Research and Design 30,000 foot category results were announced and UMD was the second place winner.

“The team was shocked. We went to the stage to receive the award and we were ecstatic. We did not expect to do so well since this was our first time at the competition,” said Martin. “That night we partied and already started planning for the 2019 competition.”

The one thing that all the members have in common is their passion for rockets. Hotek said, “You have to have a lot of passion to stay here until 10, 11, or 12 at night.”

This program and a love of rockets is what brought the club’s safety advisor and current president Martin Anderson to UMD. “This club and the rocket program is why I am here. I want to make rockets as a career,” he said.

These students’ dedication is what leads them to success in and out of the classroom. Carrillo said, “They learn invaluable organizational and communication skills from working across multiple teams. Together with the problem solving and technical skills they learn, demonstrating the ability to work well with others can help club members get internships and jobs.”